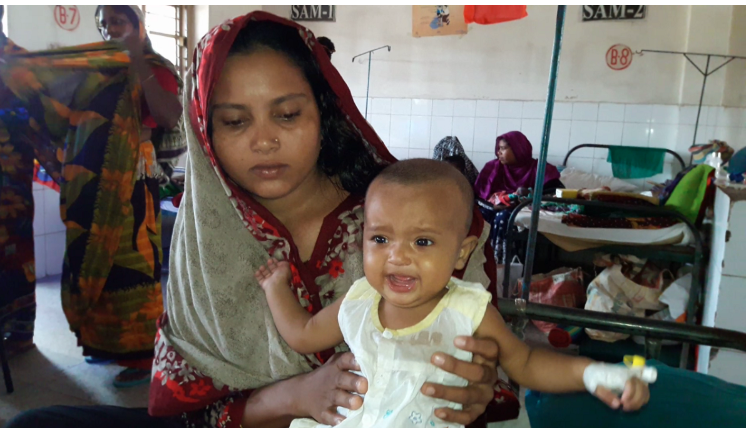 The outbreak of pneumonia in the district has put severe strain on the limited resources of the Sadar Upazila hospital which is struggling to cope with the situation.

More than 400 children were admitted there over the last two weeks with pneumonia while dozens of children are receiving treatment from the outdoor daily for the last few days.

Thirty-two children were hospitalised between Tuesday morning and noon alone.

Dr Asadur Rahman Malik Khokon, a child specialist of the hospital, said a change in weather is behind the outbreak.

The hospital, which only has 13 beds in its paediatric ward, is treating over a hundred children, said Civil Surgeon Dr ASM Maruf Hasan.

Overcrowding in the children’s ward is forcing the hospital to accommodate new patients on the floors and corridors. Some patients were even accommodated at the Gynecology ward beside the children ward.

Abdus Salam, a resident of Dingedah village in Sadar upazila, said he came to the hospital with his minor daughter who has been suffering from pneumonia for the last several days.

“There’s no bed. So, we’ve been accommodated on the veranda,” he said, adding that they have to remain in hospital for several days for full recovery.

Doctors and staff are struggling to cope with the steady flow of patients.

Resident Medical Officer Dr Shamim Kabir said the number of pneumonia patients has been rising since August 25 but the situation been worsening.

“Four hundred patients had been treated since then,” he said, adding that they are having a hard time providing medical care due to shortage of manpower. “But we’re doing our best to provide services to the patients.”

A long queue was seen in front of the outdoor department with only two physicians dealing with the patients.

Rebeka Khatun, a resident of Asmankhali village in Alamdanga upazila, said she had been waiting for four hours to see the doctor. “I don’t know if I’ll be able to get my daughter checked,” she said.

Dr Khokon suggested continuing breastfeeding the children and treating them properly as per the doctor’s suggestion. “Parents should be careful so that the children don’t sweat much in hot weather,” he said.