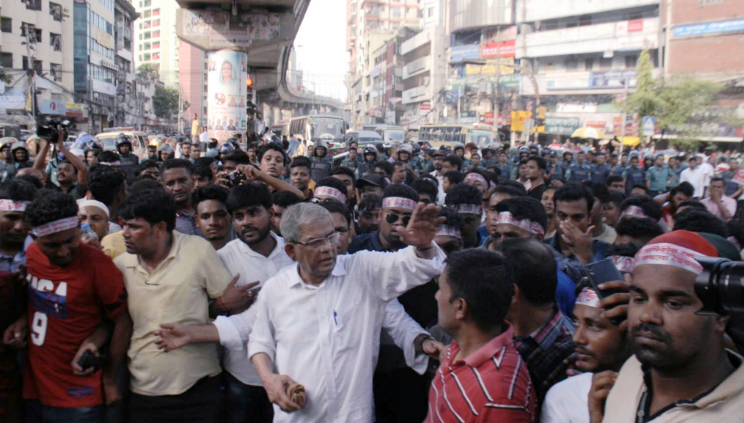 Accusing the government of working against people, BNP on Monday called upon its leaders and activists to be active on the streets with a sacrificing mentality to restore democracy and free party chairperson Khaleda Zia from jail.

BNP Secretary General Mirza Fakhrul Islam Alamgir made the call at a colourful rally taken out by the party in the city, marking its 41st founding anniversary.

The road stretched between Kakrail and Fakirerpool filled up by 2pm as the party leaders and activists came to the venue in small processions wearing caps of different colours, carrying the national and party flags, placards, banners, festoons and portraits of party top leaders.

They joined the rally heading towards Shantinagar from Nayapaltan with horse-carts, small trucks and band parties, led by their central leaders amid huge presence of law enforcers.

Hundreds of leaders and activists of the party and its associate bodies chanted various slogans seeking their party chairperson Khaleda Zia's release.

Mirza Fakhrul inaugurated the rally around 3:30pm in front of the party's central office.

He said Awami League wants to hang onto power by keeping Khaleda Zia in jail and resorting to killing and repressive acts.

“If we want to free Khaleda Zia, ensure the homecoming of Tarique Rahman and restore democracy, we must make sacrifice and be vocal on the streets against the current autocratic and fascist regime,” the BNP leader added.

He said the government will not be able to cling to power for a long time with repressive acts as no autocratic regime could do it in the past. “So, we must awake people of Bangladesh, and BNP has to play the main role in this regard.”

BNP standing committee member Khandaker Mosharraf Hossain said they joined the rally with a heavy heart as their chairperson has been in jail ‘unlawfully’ for the last 18 months.

He said the government took Khaleda to jail with a motive to destroy BNP and restore one-party Baksal rule. “We would like to tell the government that your all games are over. Today’s rally has proved that our party is now stronger than in the past as people are with us.”

Another party standing committee member, Mirza Abbas, said their party has started a movement for having Khaleda Zia freed from jail, and the government cannot suppress it this time.

BNP standing committee member Gayeshwar Chandra Roy said Khaleda Zia will be released unless the fall of the current government formed through ‘vote rigging’ “Let’s launch a movement to topple the regime which has no right to govern Bangladesh.”

Ziaur Rahman founded BNP on September 1, 1978 with a 19-point programme.

The party marked the founding anniversary with various programmes on Sunday.