The ‘Rebellion’ inside the heart of Nazrul 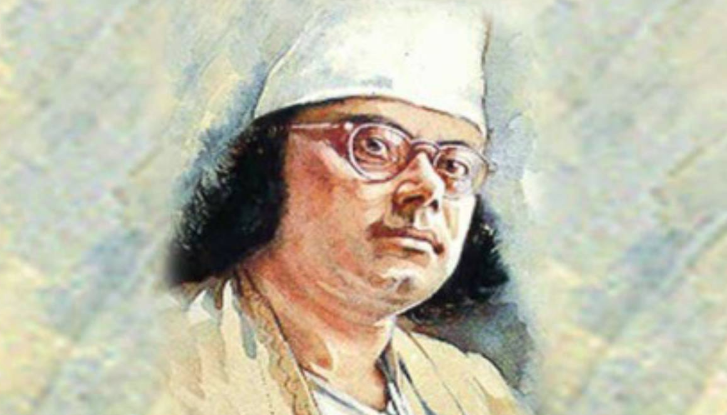 August is surely a month to mourn for Bengali people around the world. Along with Bangabandhu Sheikh Mujibur Rahman, who topped the list of the greatest Bengali of all time - two other pioneers among the top three also passed away in this month of mourning. One is Rabindranath Tagore, the only Nobel laureate in Bengali literature, and the other is the national poet of Bangladesh, the forever rebellious Kazi Nazrul Islam.

Kazi Nazrul Islam’s life was utterly challenging from the very beginning. The incidents around his life made him the rebel, and the journeyman’s expeditions were not easy by any means. Throughout his entire life, he had to fight miseries such as poverty, death of his dear ones, multiple arrests-tortures for being the nonconformist and massive backlash on his viewpoints. Those incidents, altogether, made him the rebel poet and writer.

Born on May 24, 1899, at Churulia, Paschim Burdwan district of the Bengal Presidency in British India, Nazrul was the newest member of a Muslim Taluqdar family to Zahida Khatun and her husband, Kazi Faqeer Ahmed who worked as an ‘Imam’ and caretaker at a local mosque. Nazrul got his basic education from a ‘Maktab’ which was run by a mosque, and then attended a Madrasa where he learned subjects like theology, Islamic philosophy, Quran, and Hadith.

When he was just 10 years old, he lost his father- it was like all hell broke loose. As a result, he started working as the new caretaker of the mosque, replacing his father. He also worked as the ‘muazzen’ (announcer of routine prayers) at the mosque. Nazrul then joined his uncle Fazle Karim’s travelling theatrical group which was known as ‘Leto’ group - and that helped him to learn acting. He also started writing songs and poetry for plays, which eventually exposed him to Sanskrit and Bengali literature, along with sacred Hindu texts. He also started composing interesting folk plays for his theatrical group. And all of these were just the beginnings.

He left the theatrical group in 1910 to attend Searsole Raj High School in Raniganj, Asansol, and later Mathrun High English School but had to quit because of poverty. He was never solvent because instead of running after money, he chose to raise voice against the suppression that his country and countrymen had to endure before the independence. He then joined a group of folk artists called ‘Kabiyals’ and took up various part-time jobs before joining ‘Darirampur School’ in 1914 where he studied Sanskrit, Bengali, Persian, and Arabic literature as well as Hindustani classical music, before eventually joining the British Indian Army. He started reading Bengali and Persian literature during this period, including works of prominent writers like Sarat Chandra Chattopadhyay and Rabindranath Tagore. As far as Persian poems are concerned, Nazrul was exposed to the works of Omar Khayyam, Hafez, and Rumi. The works of these great men ignited the fire inside him to publish his own works, as he came up with his first prose and poetry in 1919 through ‘Baunduler Atmakahini’ (Autobiography of a Vagabond).

After leaving the military in 1920, Nazrul joined the ‘Bengali Muslim Literary Society’ and published his maiden novel ‘Bandhan-hara’ (Freedom from Bondage). His greatest creation came up in 1922, with his revolutionary poem ‘Bidrohi’ (The Rebel) which helped him win the admiration of India's literary society. Published in the ‘Bijli’ (Lightning) magazine, the rebellious language and theme were well received, coinciding with the Non-Cooperation Movement – the first mass nationalist campaign of civil disobedience against British rule. He followed up by writing ‘Pralayollas’ (Destructive Euphoria), and his first anthology of poems, the ‘Agni-veena’ (Lyre of Fire) in 1922, which enjoyed commercial and critical success. He also published a volume of short stories, the ‘Byathar Dan’ (Gift of Sorrow) and ‘Yugbani’ (Messages of the Decades), an anthology of essays. On August 12, 1922, he started his own bi-weekly magazine called ‘Dhumketu,’ which served as the perfect platform for his revolutionary works.

The buzz around his revolutionary poems earned him popularity and he soon became popular as a ‘rebel poet’. He was eventually charged with sedition by the British and was arrested on January 23, 1923 - specifically for publishing ‘Anondomoyir Agomone’ (Welcoming the Goddess of Happiness). During his time in prison, Nazrul composed many songs and poems which were banned by the British authorities for rebellious tones. Was he toned down in fear? Well, he stood up in the court for himself and said:

“I have been accused of sedition ... To plead for me, the king of all kings, the judge of all judges, the eternal truth the living God ... I am a poet; I’ve been sent by God to express the unexpressed, to portray the unportrayed. It is God who’s heard through the voice of the poet ... I am an instrument of God. The instrument is not unbreakable, but who is there to break God?”

Because of his disobedience, he was moved from Alipore Jail to a jail in Hooghly and in April 1923, he started a 40-day fast, claiming that one of the jail superintendents had abused his power. He was released from prison in December 1923. After his release, he came up with a book titled ‘Bisher Banshi’ in 1924, which was once again banned by the British for its rebellious tone. By this time, he was known to all as the ‘Rebel Poet’.

While in jail, Rabindranath Tagore dedicated his play ‘Basanta’ (spring) to him and to thank Tagore, Nazrul wrote the poem ‘Aj Srishti Shukher Ullashe’ (Ode to the Joy of Creation). These two greatest poets of Bengali literature were each other’s’ lifelong admirer- yet Nazrul had to suffer through backlashes after creating different and new genre in music which is known as ‘Nazrul-Geeti’ (Nazrul’s song). On hearing about the death of Rabindranath Tagore on Aug 8, 1941, a shocked Nazrul composed two poems in Tagore's memory - one of them, ‘Rabihara’ (loss of Rabi), got broadcasted on All India Radio.

From 1924 to the rest of his active years, he worked hard. He got married, had kids, suffered the death of his mother and his son, got arrested several times, started working as a professional lyricist and composer, published books after books and also worked several times in several places as a journalist - but he never toned himself down as the rebel ever since he got the title. He wrote simultaneously for Hindus and Muslims. Even after all these years, festivals of these two religions never seem to be festive without his songs.

In his later years, he was paralysed but the appeal of his write-ups never lost its rebellious vibes; thus his creations inspired the freedom-seekers of Bangladeshi people to snatch independence from Pakistan.

Imagine a boy from a pious and orthodox Muslim family who at one point served even as a ‘muazzen’ (announcer of routine prayer in mosques) in his childhood, turned into a random member of a local music troupe. Imagine that boy becoming a man first and then a soldier to participate and fight in the World War representing the British, then after some years protesting against the same British rulers because of their injustice and suppressions upon his countrymen. Imagine that man refusing to accept the imposed accusation of being a traitor by the British government but also speaking face to face, eye to eye in the court and speaking his hearts out. Imagine someone in the early 20th century who refused to go with the flow by following the superstar litterateur of that era, the Nobel laureate Rabindranath while creating revolutionary literature for the mass people. Imagine someone who dared to call ‘prostitutes’ human beings, who were never respected by any litterateur or organisation before. Imagine that person, who married a Hindu woman being a Muslim during that extremely stiff era of religious fundamentalism, and wrote Bhajan-Kirtan and Ghazals at the same time without harming the spiritual vibes of religions.

Kazi Nazrul Islam, the ‘Bidrohi Kobi’ (rebel poet) of Bengali literature - was the nonconforming, patriotic, unorthodox man with unimaginable power of loving people, arts and culture - without any formal education on humanity.