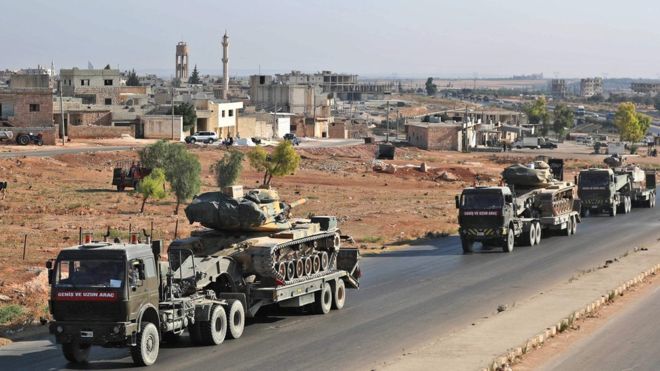 Another 12 people were injured in the attack in Idlib province on Monday, the Turkish defence ministry said.

Idlib, one of the few areas not under government control, was supposed to be protected by a buffer zone agreed with rebel-backing Turkey last year.

But government assaults have been on the increase since April.

Hundreds of civilians have already been killed as a result, and there are fears many more will die if the situation continues to escalate.

"This is our worst nightmare coming true," Jan Egeland, from the Norwegian Refugee Council (NRC), told the BBC.

"We have for years now warned against the ultimate catastrophe being Idlib, where there was no escape for three million civilians. There are some very bad militants inside.

"But a wholesale attack on this area of Idlib and adjacent northern Hama would mean that a million children would come in horrific crossfire, and it's that that now seems to be happening."