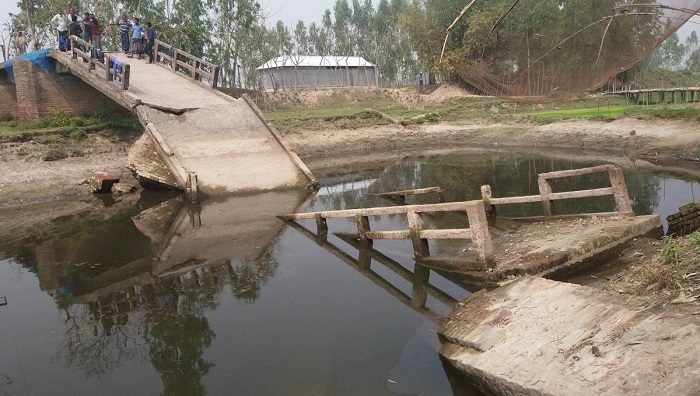 Commuters continue to face immense suffering as several important bridges and culverts in the district are yet to be repaired or reconstructed, even two years on from being damaged in the 2017 floods.

“People somehow managed to get by reinforcing some broken bits with bamboo through some local initiatives, but passenger and cargo transport faced deadlock,” said locals, adding that “We’re frustrated at lack of reconstruction of bridges and culverts despite assurances by local LGED office.”

In 2017, scores of little bridges and culverts were damaged in severe floods witnessed in some upazilas including Kurigram Sadar, causing collapse of rural communication network.

Despite 25 bridges and culverts being reconstructed by LGED over last two years, some important bridges still remain damaged and unusable. As a result, school- and college-going students plus those going to markets are facing severe communication problems.

The people of several villages have become disconnected from the physical communication network, while a stalemate persists in transportation of emergency ambulances and goods, the locals complain, apprehending an even greater increase in public sufferings for at least another six months as the bridges were not reconstructed before the advent of monsoon.

One of the bridges that suffered extensive damage in the devastating flood in 2017 is the Sanerghat bridge in Kathalbari union under Kurigram sadar upazila.

As there is no barricade on either side, the bridge is proving particularly risky and deadly for motorcyclists – many riders met accidents while trying to cross the bridge, or what’s left of it.

“No initiative has been taken yet to reconstruct the bridge even after lobbying with the authority over two years,” locals said, alleging that “no effective measures were taken despite the LGED’s repeated assurances to construct the bridge”.

Mojnur Rahman, headmaster of Nefardorga High School, said, “We’ve only one road for our communication. We’re crossing over a bamboo-reinforced bridge risking lives.”

Ahmad Hossain, a nearby resident, said, “Thousands of people used to cross the bridge everyday but now people are frustrated as the bridge is yet to be reconstructed even in two years.”

The same situation prevails in a culvert adjacent to ‘Boro Pul Par’ on Kurigram-Rajarhat road. Visiting the area UNB correspondent found that the culvert was severely damaged due to flood.

Locals complained that the LGED staff came to the spot to take measurements but did not take any effective measures for actual reconstruction.

Some of the other bridges that lie equally in disrepair include the Shokuntari bridge on Kedar-Kochakata road, Dhonitari bridge on Nageshwari-Bamondanga road and Naodanga bridge on Sontoshpur-Taleberhat road, which have already been damaged causing extreme sufferings to the thousands of inhabitants of the locality.

Kurigram LGED office sources said that 62 kilometres area of 77-km road of LGED were severely affected in the 2017 flood. Some 37 bridges and culverts were damaged and as a result, many areas became disconnected with the district and upazila sadar.

Official sources said the roads and bridges affected by flood are being reconstructed through various projects. In the last two years, 13 bridges and 12 culverts were reconstructed while about seven bridges of 300-metre breadth are being designed.

Syed Abdul Azaiz, District Executive Engineer of Kurigram LGED, said: “Approach roads to the highways of Kurigram were also damaged by flood but they were repaired immediately. So far, construction work on 13 bridge-culverts has been completed while 12 others are going on.”

“It’d be possible to construct the affected bridges and culverts within the shortest possible time,” he said.