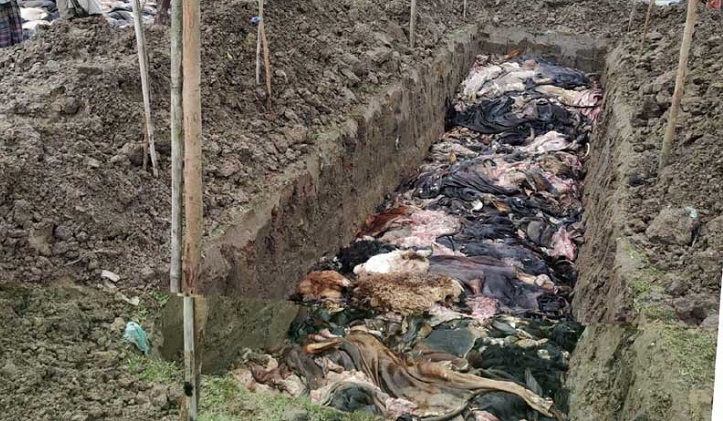 A three-member probe body was formed over burying away 900 raw-hides at the premises of Saidpur Hossainia Hafizia Arabia Darul Hadith Madrasa at Jagganathpur in Sunamganj.

The body was formed making UP Chairman Tayeb Mia Kamali of Saidpur-Saharpara Union chief on behalf of the Jagganathpur Upazila administration on Wednesday.

The other two members of the committee are Upazila Sanitary Inspector Latiful Bari and Station Officer Nabokumar Sing of Jagganathpur Fire Service.

Price of rawhide after Eid-ul-Azha gave rise to widespread discussions. Many in the sector said, the price hit a record low while many other threw away the rawhide for poor price.

Earlier on the day, Commerce Minister Tipu Munshi said the government had fixed prices of rawhide considering its current market situation after consultation with tannery owners and animal skin traders before the Eid-ul-Azha festivity.

“However, we observed that the rawhide price remained below the fixed prices and decided to bring an end to the situation by exporting the same to ensure fair price for animal skin traders at grassroots’ levels,” he said.