What do US Democrats want to do about guns? 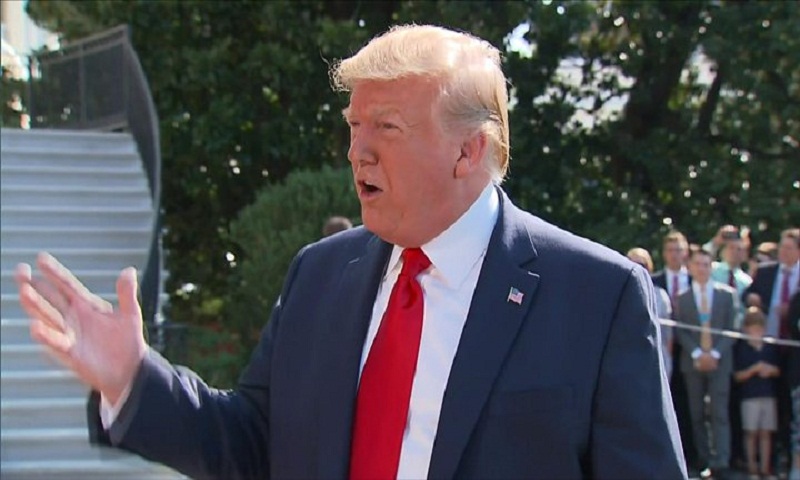 For the first time in nearly two decades, Democratic presidential candidates are talking seriously about new federal gun control regulations. But is it a passing moment spurred by recent tragedy or the sign of shifting political ground?

This weekend, the Democratic presidential hopefuls who have been criss-crossing Iowa were supposed to be celebrating the state's, well, Iowa-ness. Nearly every candidate in the 24-person field had scheduled an appearance at the state fair - an event that draws millions to capital city Des Moines - to sample pork on a stick, view the life-sized cow sculpture made of butter and stand on hay bales to give their stump speech to sometimes curious and often bemused onlookers.

Also on the schedule was the annual "Wing Ding Dinner" in the northern town of Clear Lake - another of the state's quirky must-attend functions, where hundreds of party faithful pack a steamy old ballroom to listen to presidential hopefuls make their five-minute pitches to voters.

Then the mass shootings in El Paso and Dayton happened, claiming the lives of 31 Americans - and adding to the list of roughly 40,000 in the nation killed annually by gun violence.

In a flash, the aperture of the Democratic race narrowed, and instead of a generic weekend of campaigning, the focus over the past few days here in Iowa has been on gun violence and what these two dozen presidential aspirants think they can do about it.

Before the Wing Ding dinner, eight candidates and their supporters joined a crowd outside for a moment of silence in remembrance of the victims of El Paso and Dayton.

The gathering was organised by campaign staff of former El Paso Congressman Beto O'Rourke, who cancelled his Iowa visit to help his home town mourn.

In Clear Lake, Cory Booker praised O'Rourke's decision and said he scrapped his planned speech that night to talk about gun violence and American values.

"This is one of those moral moments in our nation that's going to define the character of our country," he said. "And this is a week where I will not let the slaughter of our fellow citizens just disappear within the next media cycle."

Dustin Menke, who lives in nearby Manly, said he was impressed by Booker's speech. He used to oppose gun bans, he said, but now he's torn on the issue.

"We've got to do something about the gun violence in this country," he said. "That's just the bottom line. Not taking any action? There are consequences."

A day spent calling for action

A few shared stories about how their lives had been touched by gun violence. Montana Governor Steve Bullock's voice cracked has he recounted how an 11-year-old nephew had been killed at school by a 10-year-old with a gun in 1994.

"At the time that was the youngest school shooting," he said. "Now it wouldn't even make national news."

Candidate after candidate spoke about the need for urgent action. They mentioned red-flag laws to prevent those who could be harmful to themselves or others from accessing firearms and universal background checks for gun purchases - even private transactions. Many supported reinstating the federal ban on assault-style weapons and high-capacity magazines that was in force from 1994 to 2004.

New York Senator Kirsten Gillibrand and former Vice President Joe Biden urged the repeal of the federal law granting gun manufacturers immunity from liability lawsuits over the criminal use of their products.

Vermont Senator Bernie Sanders, who voted for the liability protections in 2005, said he now views it as a situation similar to the responsibilities of drug manufacturers for the opioid addiction crisis.

"The world has changed," Sanders said, "and responsibilities have changed."

All of these proposals received an enthusiastic reception from the crowd of activists, many of whom shared stories of how gun violence had affected their lives or the lives of loved ones.

Every proposal put forward, however, could hit up against the hard reality of opposition in Congress. While Democrats control the House of Representatives, which passed a universal background check bill earlier this year, the Senate is still in Republican hands - and Republicans, many backed by the National Rifle Association, have been an intractable obstacle to new federal gun regulation.

Even if one of these Democratic presidential candidates wins next November and has enough coattails to tip the balance in the Senate to Democrats as well, it is all but certain that they won't pick up the 13 seats necessary to prevent a Republican minority from blocking significant gun-control legislation using a parliamentary maneuvre know as the filibuster.

At a time when all the Democrats are voicing similar opinions on gun control, what to do about the filibuster has become a visible dividing line.

Washington Governor Jay Inslee was the first candidate to call for the end to the legislative filibuster, back in March. Elizabeth Warren - who received an enthusiastic welcome in Des Moines - is among the handful who have now joined him.

"The Republicans are not going to allow progressive measures through the US Senate as long as the filibuster exists," Inslee said.

Others, like Biden and Sanders, have been more reluctant.

After his remarks in Des Moines on Saturday, Biden told the BBC that gun control laws were approved in the past despite the filibuster - and there were legislative ways get measures passed by a simple majority.

"There are a lot of things you can do without giving away what, ultimately, is a protection for the minorities," he said.

Aside from the filibuster, however, Democrats have shown rare agreement on gun-control issues - coming just a week after the party's sometimes sharp divides on health-care and immigration were on display at the second round of nationally televised candidate debates in Detroit.

A change of course

The fact that the gun issue is coming up much at all is a real departure from past presidential campaigns - and even this one.

Gun control wasn't mentioned in the most recent Democratic presidential debate. The one candidate who made gun control the central focus of his campaign, California Congressman Eric Swalwell, was the first to drop out.

Conventional wisdom was that gun control was a harmful issue for Democrats. Many analysts and party insiders viewed it as the reason Democrats lost control of the House of Representatives for the first time in 40 years in the 1994 mid-term elections and why Al Gore lost the presidency in 2000. It was something that motivated conservative gun rights activists much more than it did gun-control advocates on the left.

Governor Inslee, who was a member of the US House of Representatives in 1994, voted for the first assault weapon ban - and lost his seat in that mid-term wave. He says he knew the vote was politically risky, but that it was the right vote to make.

"I represented an area that was a very rural area; it was a Republican area," he told the BBC. "I knew it was a very contentious issue."

By the time Democrats regained control of Congress in 2006, gun-control legislation was practically a non-existent priority.

"I think there's a number of areas where Democrats ... got weak-kneed, got scared of their shadow, didn't act in accordance with their values, and they've been paying for it over and over again," New York Mayor Bill de Blasio said after his appearance in Des Moines. "I think we lost the faith of people."

In 2013, after the Newtown school shooting, an assault weapons ban similar to the one passed in 1994 received only 40 votes out of 100 in the US Senate.

In his Des Moines speech, Governor Hickenlooper recounted the battle he faced in Colorado as he tried to pass universal background checks, magazine capacity limits and a red-flag law in his state after the 2012 mass shooting at a theatre in Aurora.

The NRA, he said, would not budge or negotiate. What's more, the group told Republican legislators that if they voted for any of the measures, they would face an NRA-funded opponent in their next primary.

"It was so frustrating," he said.

In 2018, however, things seemed change. Gun control candidates like Lucy McBath of Georgia won in contested House races, despite vigorous opposition by the NRA. That group's once prodigious fund-raising operation was struggling, and the organisation itself was beset by scandal.

The Parkland school shooting, and the grass-roots youth movement that arose from it, are part of the reason why.

According to South Bend, Indiana, Mayor Pete Buttigieg, the rise of white nationalism - emboldened, he says, by Donald Trump - has become another clarifying moment.

"We are living with a toxic brew of two different things, each of which is claiming lives and each of which represents a national security emergency in this country" he said. "One of them is the ready availability of guns and the way they can fall into the wrong hands. The other is the rise of hate. And when they come into contact with each other, it is deadly."

Senator Kamala Harris of California was, if anything, even more blunt about the president's rhetoric.

"He didn't pull the trigger," she said, "but he's certainly been tweeting out the ammunition."

Whether or not Trump bears some culpability, his reaction to these most recent shootings are further evidence of shifting ground on the gun debate.

Back in 2016, then-candidate Trump campaigned by fully embracing the NRA and its aggressive gun-rights agenda. He said he was a firm believer in a broad interpretation of the Second Amendment's right to bear arms and joked that gun owners might take matters into their own hands if Democrats like Hillary Clinton tried to infringe on their rights.

Massachusetts Senator Warren told reporters on Saturday that she wasn't convinced, however.

"Did he say that just before or just after he then bowed to the NRA and said but of course he would do what the NRA wanted?" Warren asked. "As long as the NRA is calling the shots, there's not going to be meaningful change in this country."

She added that meaningful change only comes with fundamental democratic reform.

If Trump does follow through and fully support background checks, Democrats here will welcome the development - but what was once all but the best that a Democratic presidential candidate could ask, or hope, for is now just the starting point.

One week is a blink of an eye in US politics, of course. By February, when Democratic voters head to the polls in Iowa and start the nominee selection process, the gun issue could once again be on the back burner. Candidates could again spend most of their time talking about healthcare or income inequality or education.

That is without a doubt what the NRA and gun-rights advocates are counting on.

This weekend in Iowa, however, Democrat after Democrat insisted that, at last, things are changing.

Klobuchar told the crowd that "the heat is on like never before".

Time will tell if that's the case. But at least in Des Moines, the gun safety forum attendees believed that real change is finally in reach.

"People have had enough," said Jerry Jones, an insurance worker who drove to Iowa from Kansas City for the event. "We're not giving up anymore. We're not going away to our own little corners. We're beginning to organize, and we're coming together."