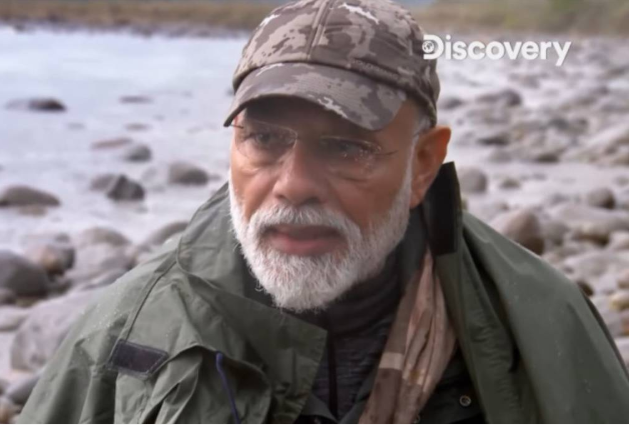 Indian Prime Minister Narendra Modi will soon be seen in Bear Grylls’ show Man vs Wild where they will spend some time in Jim Corbett National Park. In a new clip released by the makers, we see Grylls talking to PM Modi about the dangers of spending time in a wildlife area and how he has to keep ‘the most important man in India’ safe, reports The Indian Express.

Talking about the wildlife area, PM Modi shares, “We should not take this place as a danger zone. When we go against nature then everything becomes dangerous. Human beings too become dangerous. On the other hand, if we co-operate with nature, then she also co-operates with us.”

Bear Grylls and Narendra Modi then discuss the latter’s time in the Himalayas. They also talk about wildlife conservation as Grylls creates a makeshift weapon and hands it over to the PM. But PM Modi politely says, “My upbringing does not allow me to take a life. However, I will hold on it (the spear) since you insist.”

In the clip, PM Modi also brings up Swachch Bharat Abhiyaan. Modi says, “Someone from outside cannot clean my India, the people of India make India clean. Personal hygiene is in the culture of the Indian people. We need to develop the habit of social hygiene. Mahatma Gandhi has done a lot of work on it and recently we are getting good success in this. I believe India will succeed in this very soon.”

Man Vs Wild With Bear Grylls and Prime Minister Modi will premiere on August 12 at 9 pm.