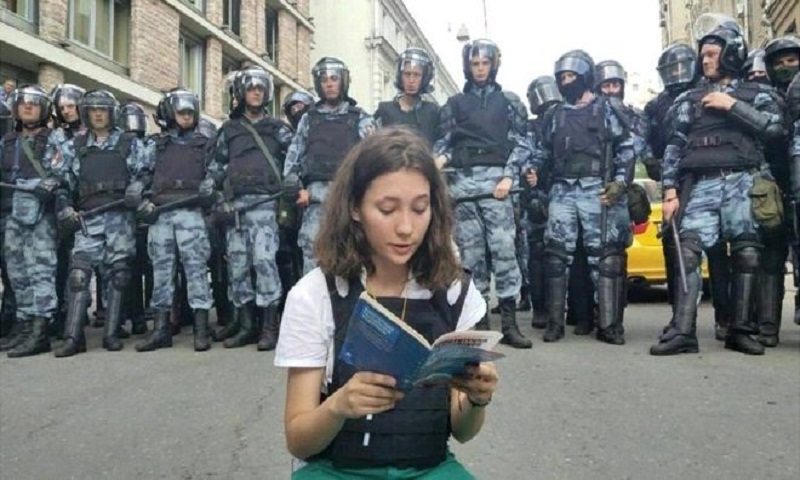 On her lap was a copy of the Russian constitution, which she began reading to the heavily armoured police around her. Behind them was a demonstration calling for transparent Moscow elections, in which several people were injured.

The photo went viral within minutes and Olga Misik, 17, became a symbol of Russia's pro-democracy movement. Some compared the image to Tiananmen Square's Tank Man, who stood in a tank's path in Beijing in 1989.

"The situation in Russia is currently extremely unstable," Olga told the BBC.

"The authorities are clearly getting very scared if they are consolidating armed forces from different parts of the country to chase peaceful protesters. And people's mentality has changed, as I can see."

Moscow has seen regular weekend protests against the disqualification of independent candidates in September elections to the city assembly (Duma).

Olga - who hopes to attend Moscow State University to study journalism in September - says her protest was not just about the upcoming elections: it was to highlight a drift away from the post-Soviet constitution, which valued the rights of Russian people.

"I am only for myself and for the people. I have a neutral attitude towards [Alexei] Navalny and other opposition leaders, but I support what they are trying to do."

Olga Misik was born and grew up in a Moscow suburb. The middle child in her family, she loved reading. Authors who spoke of dystopian futures and authoritarian regimes, like George Orwell and Aldous Huxley, were particular favourites.

She excelled at school, getting straight As, and had an interest in current affairs. But her interest in politics sharpened last autumn.

She was 16 and was watching protests on social media against proposals to raise the retirement age from 55 to 60 for women and 60 to 65 for men. It spurred her to join in.

"It's not like I'm near retirement myself, but I saw the injustice in it," Olga says. "I was angry with the politicians because President Putin himself had promised that he wouldn't increase it, and then he signed it into law in October 2018."

On 27 July Olga was among thousands of people attending an unauthorised protest in Moscow against the bar on opposition activists running in the Duma election. Several prominent opposition leaders were detained ahead of the rally.

Sitting cross-legged - riot police equipped with shields, batons and helmets behind her - she pulled out her copy of Russia's 1993 constitution and began reading from it.

"I read four sections," she says. "An article talking about the right to peacefully protest, an article saying that everyone can take part in elections, has the right to freedom of speech and that the people's will and power are the most important thing for the country."

Photos of her protest were shared thousands of times on social media.

Olga left the scene after the reading, but was later arrested on her way to a metro station.

She was among more than 1,000 protesters arrested as a result of the 27 July rally. She has been detained four times in the past three months. She says she was peacefully protesting each time.

While the police did not mistreat her, Olga says they denied her a doctor when she said she felt ill. She was released 12 hours later and faces a fine of 20,000 roubles (£250; $305) for taking part in an illegal protest.

'I am the exception'

Olga says she is not typical of young women in the country.

"Not many young women in Russia are politically motivated - only really those who want to go into journalism. I am the exception, not the rule."

Olga does not fear that her political outspokenness will harm her, but she is slightly worried that, as she is under 18, she is still dependent on her parents' support.

Social services have come to visit her parents to discuss her protesting. While this makes her parents nervous, Olga says it will not keep her away from protests and rallies.

Meanwhile, Russian prosecutors are seeking to strip a couple of their parental rights for having taken their infant son to the demonstration on 27 July, where they handed the baby over to a third person temporarily.

During this turbulent time, Olga says her future is to document and bear witness to the country's political landscape.