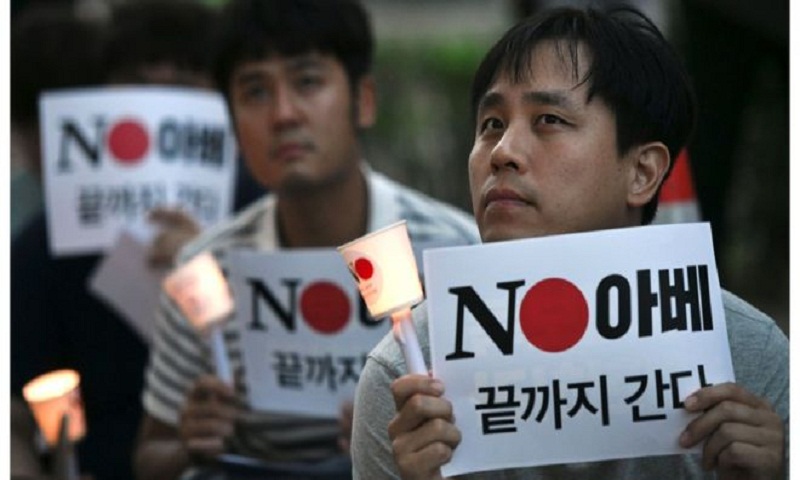 Japan will remove South Korea from its list of trusted trade partners, deepening a bitter row between the two countries.

The decision to strike South Korea off its so-called "white list" puts fresh trading restrictions on the country.

Seoul has said it will respond "sternly" to the "unfair" trade decision.

The trade spat has been fuelled by a diplomatic dispute over compensation for wartime labour.

Japan has said the measures are based on national security concerns, and also address Seoul's inadequate export controls.

Seoul has reacted swiftly to the decision, which was expected, with government spokesperson Ko Ming-jung saying: "Our government will sternly respond to Japan's unfair decision."

South Korea had previously warned it may reconsider an intelligence sharing accord with Japan if the feud worsens.

What will be the impact?

Tokyo is due to remove Seoul from the white list later this month. After that, Japanese exporters must apply for clearance to export a wide range of goods to South Korea.

It is the first country to be removed from Japan's list of trusted trading partners, which currently has 27 nations, including Germany, Britain and the United States.

The decision to strip Seoul of its preferred trade status comes one month after Japan tightened rules on the export of materials crucial for South Korean tech manufacturers.

Those restrictions, on products needed to make display panels and memory chips, have worried Seoul over the risks to its already slowing economy.

These are key industries for South Korea. The country's tech giants Samsung Electronics and SK Hynix exported around 60% of global memory components last year, according to IHS Markit.

It has also rattled the electronics industry over potential threats to the global supply chain.