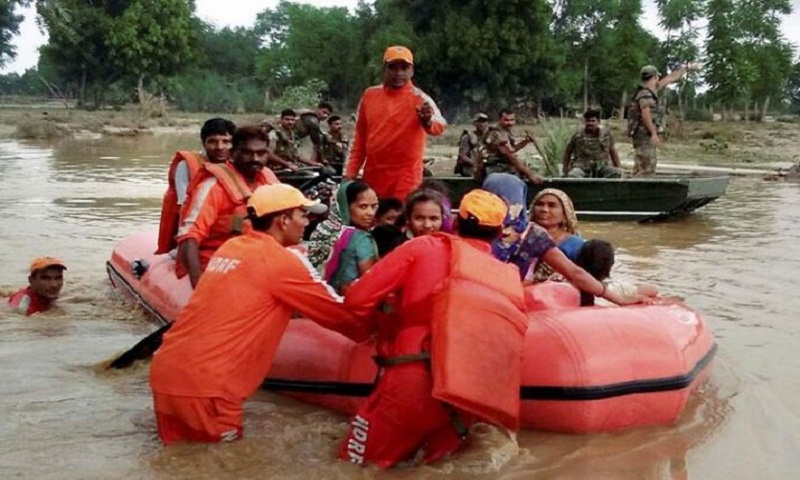 The flood situation remained grim in Bihar with the death toll climbing to 127 on Friday, even as the Nitish Kumar government said it will be writing to the Centre for help in the wake of the calamity which has affected over 80 lakh people in the state.

Two deaths each were reported from Darbhanga and Kishanganj districts, the state Disaster Management Department said in a release.

The total number of casualties in Darbhanga now stands at 12 and seven in Kishanganj.

Thirteen districts in the state are hit by the floods, which have affected 82.84 lakh people till date, the release stated.

Sitamarhi and Madhubani districts remain the worst affected with 37 and 30 casualties, respectively, and together account for more than 31 lakh flood-affected people.

Katihar and West Champaran districts have not reported any deaths so far.

Earlier in the day, Chief Minister Nitish Kumar told the state assembly that his government will be writing to the Centre to send a team to "assess the damage" caused by the calamity, and "provide assistance as they deem fit".

Kumar made the statement on the final day of the monsoon session in response to a query from senior RJD leader Abdul Bari Siddiqui, who had sought to know whether any demand for central assistance has been made by the state government.

"Currently, we are carrying out relief and rescue work from our own resources. The assessment for flood damage is being done. A memorandum will be sent to the central government after which a team will visit the state to assess the damage and provide assistance which they deem fit," he said.

Meanwhile, people living in the marooned areas presented a picture of fortitude in the face of nature's fury, as they were seen trying to get on with life, building make-shift bamboo bridges across swollen rivulets and canals, and wading through knee-deep waters on foot or atop bicycles and motorcycles.

Rehabilitation work is going on in full swing as food and other relief material are being airdropped by two helicopters of the Indian Air Force, pressed into service by the Central Air Command headquartered in Allahabad, the release said.

In addition, 19 teams of the NDRF, equipped with its own paraphernalia, are assisting the civil administration in carrying out rescue operations. The state government has deployed 900 personnel with 133 boats, on its part, in the flood-affected areas.

Food is being prepared at 888 community kitchens for the flood-hit people, including more than 6,000 displaced who are taking shelter at 10 relief camps, the Disaster Management Department said, reports PTI.