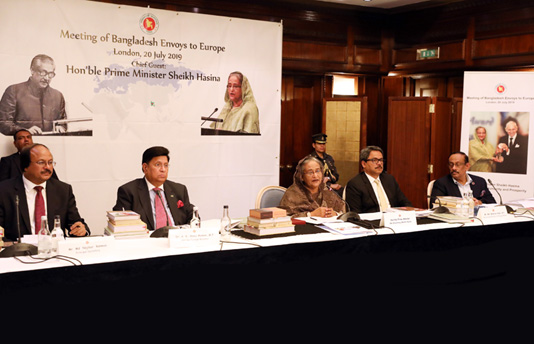 Prime Minister Sheikh Hasina on Saturday asked Bangladeshi envoys in Europe to pursue political and economic diplomacy together in the interest of the country’s economic development.

“We need to focus more on economic issues besides political diplomacy so the ongoing development in Bangladesh will continue,” the Prime Minister said while speaking as the chief guest at the 'Envoys’ Conference', the first of its kind, in London.

At the conference, the Prime Minister held discussions with the Bangladeshi envoys on various issues and gave them necessary directives.

The issues included enhancing Bangladesh’s image further in Europe, boosting trade and commerce and attracting more investment in the country.

Rohingya issue and migration as well as the celebrations of the birth centenary of Father of the Nation Bangabandhu Sheikh Mujibur Rahman and the Golden Jubilee of the country’s independence were also discussed in the conference.

Referring to the fast-changing world, Sheikh Hasina advised the diplomats to take effective and time-befitting action plan for establishing deeper and broader relations with foreign countries.

“To this effect, we need to explore opportunities for enhancing investment, trade and skilled manpower export in countries, particularly in the European states,” the Prime Minister said.

She said Bangladesh now has a very big and skilled youth force who can meet the demand of global job markets.

Referring to the government’s various initiatives for building a skilled work force, she said they have already introduced apps for helping people learn nine different languages.

She suggested the envoys to assess the markets of their respective countries of assignment and identify the barriers to bolster economic ties.

The Prime Minister said her government is working with specific target of making Bangladesh a developed nation by 2041 and asked the diplomats to draw their own specific targets in line with the goal.

She also advised the envoys to provide better and faster services to expatriate Bangladeshis.

Sheikh Hasina said Bangladesh is no more dependent on aid and is sourcing over 90 percent of Tk 5,23,190-crore national budget from its own resources.

However, the Prime Minster noted that some groups, including those who failed in the elections, are carrying out propaganda against Bangladesh to halt the country’s ongoing development.

In particular, she said BNP raised questions against the last general election after doing “election business” instead of meaningfully participating in it.

Sheikh Hasina said people in Bangladesh no more believe in propaganda, instead they put their faith on the socio-economic development efforts and achievement of the Awami League government.

Referring to the foreign policy, enunciated by Father of the Nation, Bangabandhu Sheikh Mujibur Rahman, the Prime Minister said the foreign policy of “friendship with all, malice to none” put Bangladesh in a prestigious position at the global stage.

She said following the policy, Bangladesh solved many contentious issues, including transfer of enclaves with India, through diplomatic dialogues.

“Similarly, we hope the Rohingya issue will also be solved through discussions,” she said.

Pointing to the geographical position of Bangladesh, she said the country could be the bridge between the East and the West.

t the conference each of the envoys made separate presentation on the activities, challenges and future plan of actions for their respective countries of assignment.

The Prime Minister left Dhaka for London on Friday morning on an official visit to the United Kingdom to attend the envoys’ conference and other programmes.

The Prime Minister is expected to return home on August 5.