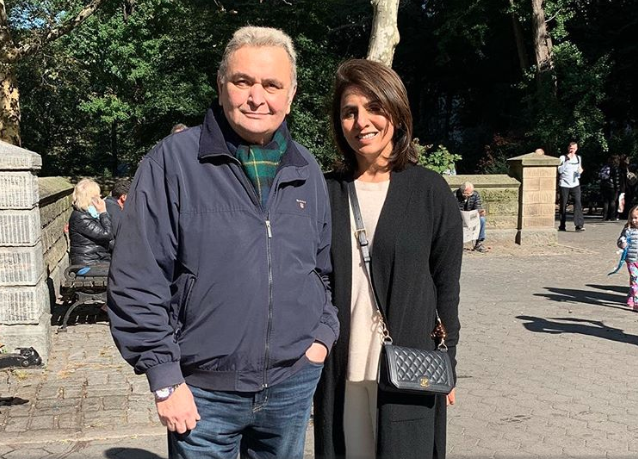 Rishi Kapoor, battling cancer in New York, told Mumbai Mirror that the disease was first detected when he was filming in New Delhi last year and how things have changed for him drastically after leaving for the treatment nine months ago. The 66-year-old actor said that after starting the treatment he lost 26 kilos as he 'had no appetite for the first four months.'

The actor also added that he is still under treatment and he has regained seven-eight kilos. Speaking to Mumbai Mirror, Rishi Kapoor said, "The problem was detected when I was shooting in Delhi and was required to dye my hair white. I was told to immediately rush to the Sloan Kettering Hospital.

Thankfully, my health started improving week after week, month after month... I had lost 26 kg as I had no appetite for the first four months. Now, I've gained seven-eight kg. I don't want to look too lean, but I haven't gone back to my original self either. Thank God for that."

He elaborated, "I am perfect now. The cancer is in remission, but I am still under treatment. The problem is not the treatment but the reaction time. There is a six-week gap between one treatment and the next when all you can do is eat, shop, watch movies, live a normal life which I would rather do at home than here in New York."

Rishi Kapoor is feeling homesick and says that he hopes to return by the end of August. The Rajma Chawal actor said, "It's been nine months and 16 days - I know since I have been counting the days - that I have been away. I really miss home. I have to be here for 11 months, so I will not be back before the end of August. I am waiting to come back and raring to get going. I am hoping that I can plan an end-August return but all this talk that I will be back in early September for my birthday, is again nothing but speculation."

He thanked his wife Neetu Kapoor for supporting him through and through and said, "It's been a difficult time, very taxing, but Neetu (wife), and my children (Ranbir and Riddhima) have been very supportive. I am grateful to everyone."

Rishi Kapoor will be next seen in Jhootha Kahin Ka, which he filmed before leaving for the US. The actor also said that he has committed to a project, which he will resume after returning to India.