Heatwave adds to the woes of migrants stranded in Bosnia 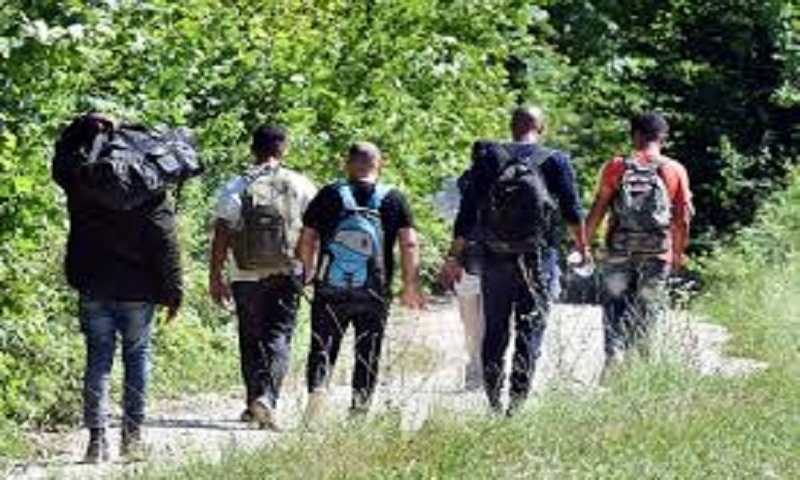 Stranded in Bosnia, thousands of migrants face yet one more hurdle on their journey towards the European Union: the scorching summer heat in the Balkans.

Under a leaden sky, Saleh Alhasan and his friends hurry to reach the shade of the woods after failing yet again to cross the border to Croatia, the last barrier on the long and tortuous road into the European Union.

"I tried more than 15 times... It has been 10 months that I try to pass. And I do not want to give up. I just want to see my son" born in Sweden, says the 33-year old Syrian architect.

His wife was among hundreds of thousands of migrants and refugees who took the so-called Balkans route in 2015, before the EU borders closed for them.

On a dusty road, Saleh and his companions pass by red signs hanging on trees, warning that the field is mined: a legacy of the country's brutal 1992-1995 war.

They stop at a stream to refresh themselves, exhausted after walking in temperatures exceeding 35 Celsius degrees (95 Fahrenheit).

The men no longer know where to rest.

In Bihac and Velika Kladusa near the Croatian border, reception centres with a capacity for 3,500 run by the International Organization for Migration (IOM) are full.

Saleh and his friends live in unhealthy squats. He wants to return to Sarajevo where, he says, "there are more options" for a fresh attempt to cross the border.

The flow of newcomers slowed during winter but has now resumed and "a hundred migrants arrive daily in the canton" of Bihac, says regional police spokesman Ale Siljdedic.

"But recently far fewer people succeed in crossing the border.

Croatia has considerably reinforced its police presence," he adds.

According to Bosnia's security minister, more than 34,000 migrants from Asia and Africa have illegally entered the country since the beginning of 2018, 11,000 of them this year alone.

Some 8,000 are currently in Bosnia, according to European Commission estimates.

This has caused tensions both among migrants of different nationalities and with locals, who are also poor. Recently, hundreds of migrants occupied public spaces in the town of Bihac, which is home to some 65,000 people.

With the help of the local Red Cross, the authorities in June set up a camp in Vucjak, an uninhabited zone a dozen kilometres from the border, to accomodate migrants who have not found a place in IOM centres.

But according to the United Nations, the zone around this camp is also "very close" to minefields.

The EU finances the IOM centres, but it has refused to provide funds for the Vucjak camp because "it is not a suitable location and presents a clear danger" for those staying there.

Bihac mayor Suhret Fazlic says the problem is the facility is too close to the border.

Nicolas Bizel, head of operations at the EU delegation in Bosnia told AFP that this was not the main issue.

His concern was that it was too close to unexploded wartime mines and that there was also a risk of a methane explosion because the zone used to be a landfill site.

This camp became know as "The Jungle" by its occupants -- like the one that sprang up in the northern French port city of Calais, before being torn down in 2016.

"It is too hot. We could not rest in the tents," said Suleman Ashraf, a 29-year-old Pakistani trying to get to Spain to join his brother.

The food that arrives twice a day is everything we have here.