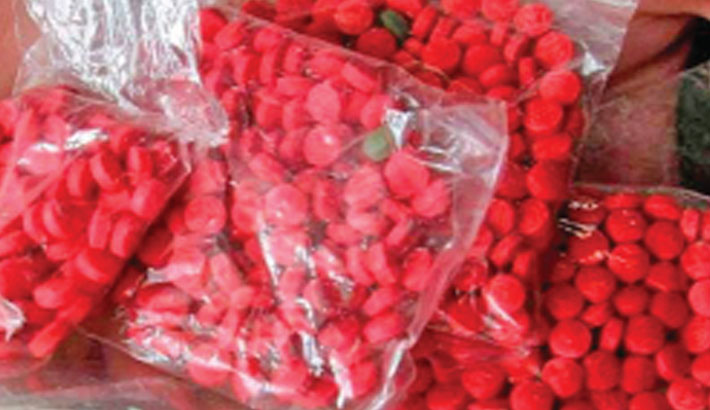 As the government has taken strict vigilance against drug peddling and abuse, innovative Yaba smugglers have been using new ways to carry on the illegal trade by dodging police deployed in the railways, which has become more popular for the business in recent months, official sources said.

The sources said although the law enforcement agencies including railway police maintain strict vigil, but they have failed to stop the use of railways for drug trafficking.

Smugglers have innovati8ve ways to carry the “pink pills” by using women who keep the drugs hidden in “sensitive areas” of their bodies, including the stomach after swallowing plastic bags in which is stuffed with this drug that has become a major worry for the country which borders Myanmar and India.

Wikipedia said Yaba was named ya khayan (hard-working pill) in its early days to ya maa (horse medicine), the drug was named ya ba (crazy pill) in 1996”.[3] It was given to horses when pulling carts up steep hills and for other strenuous work in Shan State in Burma. Yaba has different names in different countries and in Bangladesh it’s colloquially known as “baba”, “guti”, “laal”, “khawon”, “loppy”, “bichi”.

“Due to lack of adequate manpower and equipment, it is not possible to stop the drug business using trains could not be successful so far  … general passengers should help the police to deal withis situation,” he told the daily sun.

State-run Bangladesh Railways officials expressed their concern at the increasing use of its network for smuggling Yaba and said they required scanner machines in all the stations, increase in surveillance staffs and observation of freight trains. In the absence of such support 90 percent of the smugglers get away.

The officials said they seize, based on secret information, upto a staggering 12,000 yaba tablets every month in Chittogram and Dhaka’s Kamalapur railway stations.

Sources said women from different age groups are associated with Yaba shipment, but there were no women police on the trains to search them as male police are not generally allowed to frisk a woman.

Intelligence sources said, local and mail trains are used as the safest vehicle to smuggle various goods including heroin and yaba. There are no police on those trains.

Upto six times more passengers than allowed normally travelled on these local or mail trains which was an advantage for the smugglers to mingle around. The smugglers traveled on these trains in guise of the passenger. The criminals are carrying drugs through using various tactics on inter-city trains.

Everyday 354 passenger trains operate on different routes of the country. Of these, 92 are intercity trains. But police are not available in all trains. Only a few policemen are on some trains.

There are 3-4 police on each train of 2,000 to 2200 passengers. As a result, it is not possible for them to locate passengers’ bodies or to identify illegal goods. In most of the cases police members were seen with ticket attendants.

Police members working in the field level said due to shortage of manpower and a no separate intelligence the smugglers remain undetected.

About 99 percent of the passengers who arrived in the capital were passing the station without checking or searching, they said.

Officer-in-Charge (OC) of the Government Railway Police (GRP), Dhaka, Mohammad Yasin Faruk, told the daily sun the railway police were actively working for the prevention of drug and arrest of criminals.

However, thousands of passengers move every day, especially in Kamlapur and Airport Railway Stations. It is not possible to detect or search people without secret information, he said.

The police official said that every month, 5000 to 6000 Yaba including drug peddlers are being detained. The most worrying thing is, the smugglers are trafficking Yaba through the rectum, genitalia and abdomen.

Police arrested a youth with 5000 yaba from Kamalapur Railway Station in the capital in 2016.

Earlier, Railway Police has arrested a woman named Mukta with 700 yaba tablets from Kamalapur Railway Station in the capital.

The authorities have been applying for recruitment of 4000 police members for several years. Later, a decision was taken to appoint 1450 police, but the matter still not came to light.

Due to lack of manpower and modern equipment, the trains are almost open, the smugglers feel rail route safe for smuggling.