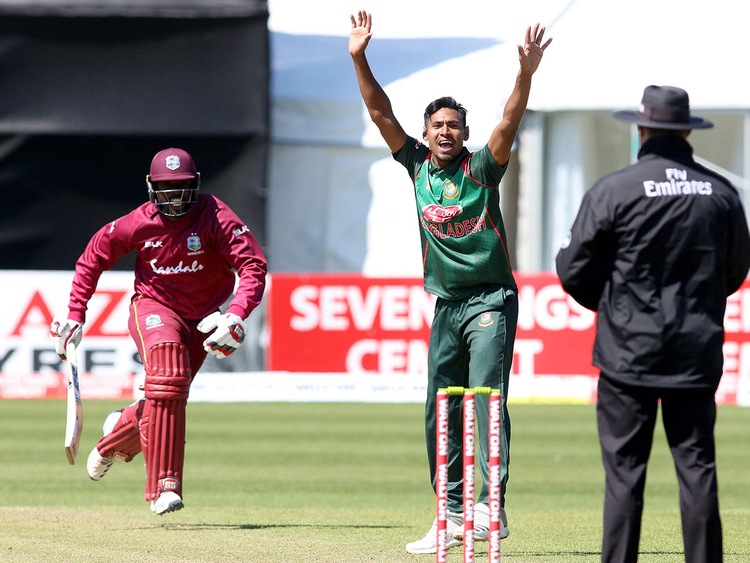 Emboldened by their recent record, Bangladesh will take on West Indies in a World Cup match at Taunton on Monday that turned out to be a must-win game for them in a bid to stay alive in the semifinal race.

It will be Bangladesh’s fifth game in the cricket’s biggest extravaganza after they accumulated three points from four games. Having kick-started the tournament in impressive fashion with a 21-run victory over South Africa, Bangladesh suffered two bitter defeats-against New Zealand by two wickets and against England by 106 runs before their game against Sri Lanka was washed out without a ball being bowled due to heavy rain.

Like Bangladesh West Indies also have three points in four games after winning one, losing two and a washed-out game.

West Indies are the side against whom they would be confident because of their recent result-they have beaten West Indies three straight times in quite dominating fashion including the final in the recent tri-series in Ireland to become an unbeaten champions.

But the West Indies side that they faced off in tri-series is a vastly different side with the inclusion of their premier players like Chris Gayle, Andre Russell and others.

Nonetheless Bangladesh will be confident since they even beat a full-strength West Indies side in quite several times.

What however remains the talking point was to how West Indies, a side full of big hitters, would capitalize on the Taunton’s ground, which is shortest ground in England and how Bangladesh batsmen would deal with West Indies fast bowlers 90 mile per hour bouncer.

The likes of Andre Russell, Chris Gayle though have the ability to clear the boundaries even in the largest ground of the World with utmost ease, the shorter boundary means even their miss hit which could be a catch in larger ground would be six in shorter square boundaries.

“Because of the size of this ground, we might have to re-think some of our attacks, plans and strategies. It is a much smaller ground, so we have to ensure we are more spot-on and consistent, and try to create the pressure,” said Bangladesh fast bowling coach Courtney Walsh who also added that Mustafizur Rahman with new ball would have to give early breakthrough to keep Caribbean batsmen at bay.

While Bangladesh dealt with the short balls better in the ODI series that followed as well as last month in Ireland, the pitches were far slower than what is expected in Taunton.

Bangladesh opener Tamim Iqbal said they are ready to deal with Caribbean bowlers’ bouncer and play fire with fire. What gave Tamim confidence was their familiarity to handle the short balls of West Indian pacers.

“We normally try to simulate in the nets what our opponents are likely to do,” Tamim said. “They usually target us with the short ball but they do the same against all sides in the first ten to 15 overs. They also give run-scoring opportunities. We have to prepare for both, that’s why we are working hard in practice. We want to make sure it is not a surprise for us.

“The first three bowling attacks I played against in this World Cup [South Africa, New Zealand and England], all were more or less equal,” he said. “West Indies have pace, three bowlers who bowl above 140. The good thing is we have played all three in the last year-and-a-half.”

The small size of the Taunton meant Bangladesh could be tempted to bring up fast bowler Rubel Hossain, replacing Mehidy Hasan Miraj and if Mushfiqur finally doesn’t play, Liton Das will be automatic choice. But Tamim Iqbal said, Mushfiqur thought was taken for an X-ray his injury didn’t look serious that could rule him out from the match.

A fine start to the day is expected, with early sunshine, followed by partly cloudy intervals thereafter. With the sun expected to stay out for the most part, and the boundaries at Tauton featuring short dimensions, a high-scoring game could be on the cards.