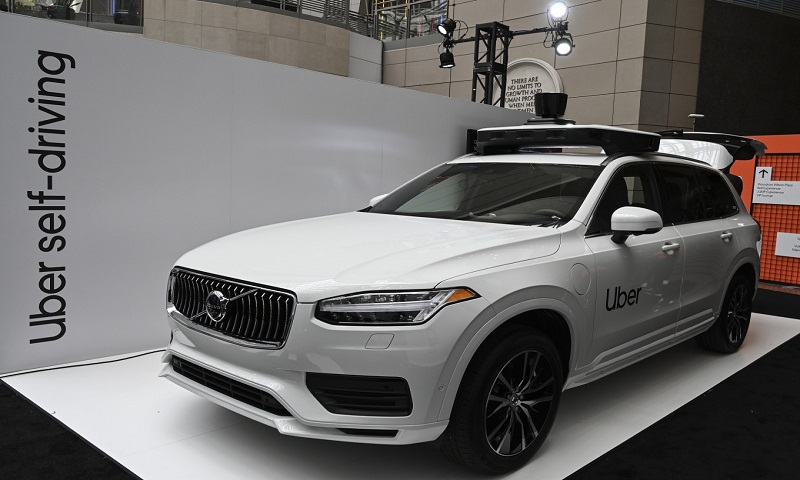 Uber Technologies Inc unveiled its newest Volvo self-driving car in Washington on Wednesday as it works to eventually deploy vehicles without drivers under some limited conditions.

Uber said the new production XC90 will be assembled by Volvo Cars in Sweden and have human controls like steering wheels and brake pedals, but also with factory-installed steering and braking systems designed for computer rather than human control.

Uber Advanced Technologies Group chief scientist Raquel Urtasun showed off the company's artificial intelligence technology that allows it to drive autonomously for long distances on highways without maps and "on the fly" to plot its course and navigate construction zones.

"Our goal is get each one of you to where you want to go much better, much safer, cheaper," Urtasun said.

As the race to push out autonomous cars across the globe heats up, other companies are also working to deploy self-driving vehicles in limited areas.

The No. 2 U.S. automaker also opened a research center in Tel Aviv, joining a growing number of major automakers and suppliers setting up shop in Israel's tech hub.

General Motors Co in January 2018 sought permission from U.S. regulators to deploy a ride-sharing fleet of driverless cars without steering wheels or other human controls before the end of 2019, but is still struggling to win regulatory approval.

Alphabet Inc's Waymo unit is operating a robotaxi service in Arizona and said last month it is partnering with Lyft Inc to serve more riders.

South Korea's Hyundai Motor Co and Kia Motors Corp both said they would invest in the self-driving car software startup Aurora and speed up development of their respective autonomous vehicle technologies.

Carmakers have struggled to maintain profit margins faced with the rising costs of making electric, connected and autonomous cars. As a result, they are setting up alliances and lining up outside investors to combat spiraling development costs.

Previously, Uber had purchased about 250 Volvo XC90 SUVs and retrofitted them for self-driving use.

The new vehicles - known by the internal code number 519G and under development for several years - are safer, more reliable and will replace the older vehicles in Uber's fleet "soon," according to Eric Meyhofer, the head of Uber's Advanced Technologies Group.

"This is about going to production," Meyhofer said in an interview at an Uber conference in Washington on Tuesday.

The new vehicle also has several backup systems for both steering and braking functions as well as backup battery power and new cybersecurity systems.