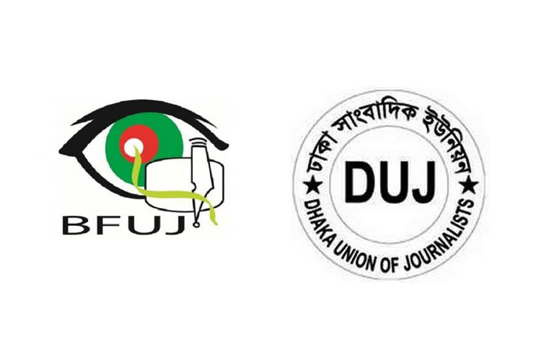 “BFUJ and DUJ consider the NOAB’s statement over the 9th Wage Board as unacceptable, unrealistic, and immoral and an attempt to hide the facts,” BFUJ President Molla Jalal and Secretary General Shaban Mahmood, DUJ President Abu Jafar Surjo and General Secretary Sohel Haider Chowdhury said in a joint statement.

The NOAB’s statement titled ‘How much realistic the recommendations of the 9th Wage Board for journalists?’ published in different dailies on June 13 hurt the journalists and caused worries to them, they added.

Mentioning that journalists and media workers work at their respective outlets considering it as their own organisation, the journalist leaders said calling the bread and butter and dignity of the journalists into question at the final stage of awarding the 9th Wage Board, the statement of newspapers owners will create crisis in the media industry.

The statement will tell upon the whole industry by creating distance and hostile relation among the media owners and the workers, they added.

BFUJ and DUJ have no objection if NOAB gets more facilities from the government for the welfare of the journalists and media workers, they said, adding that but it will not be tolerated if the journalists are sacked or deprived of their legal rights in relation to the wage board award.

If needed, journalists and media employees will go for a tougher movement to realise their demands, the journalist leaders said.