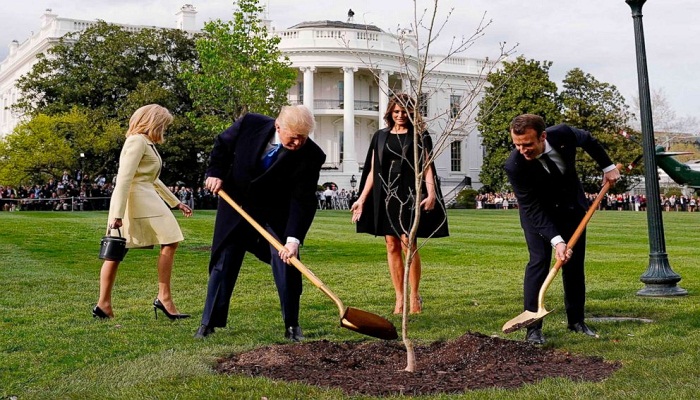 Last year, two world leaders stood with their wives on the South Lawn of the White House, gold-plated shovels in hand, and happily planted a sapling oak, a gift from France to the United States that symbolized the strength of the allies' bond.

Now, it appears that the tree has met an unfortunate demise. French newspaper Le Monde was first to report that the tree, which French President Emmanuel Macron brought to America as a gift to US President Donald Trump in April 2018, has died while in quarantine. Macron had come to the White House for the first official state visit of the Trump administration.

CNN has not independently confirmed the report and neither the White House nor the US Department of Agriculture responded to CNN requests for comment.

The death of the tree is perhaps no longer symbolic of the ties between France and the United States, as was intended, but more a metaphor for the present fractured relationship between Trump and Macron.

Though the two men were cordial and appeared to get along during last week's D-Day Commemoration events in Normandy, France, which featured a handful of events featuring the Macrons and the Trumps, there has been more recent friction than friendship.

Once described as a "bromance," the Trump-Macron friendship has since withered. Macron has in the past year been openly critical of Trump's increasingly "America First" mentality when it comes to issues ranging from the Iran nuclear deal to climate change.

In a September 2018 speech to the United Nations General Assembly, Macron railed against Trump's method saying "dialogue and multilateralism" were the more effective means of solving problems. Macron is not supportive of an isolationist approach to fix what ails the world's conflicts; similarly, the tree was apparently also not a fan of isolation.

The tree itself was much more than any old oak tree, having come directly from the Belleau Wood in Northern France, where in 1918 during World War I, thousands of US Marines died during the three-week battle.

"The blood (of Americans) was spilled to defend France," tweeted Macron last April after he and Trump participated in the ceremonial planting.

However, shortly thereafter, the five-to-10-year-old, approximately four-feet tall sapling was removed and placed under the care of the USDA's Animal and Plant Health Inspection Service at its facilities in Beltsville, Maryland, according to a USDA official at the time. The official had told CNN the quarantine was part of normal regulatory rules for imported trees and could last up to two years.

The service "worked closely with French officials to facilitate the importation" of the tree, the official had said, but quarantine was necessary because "pathogens like the fungi phytophthora are not visible, like insects are, so it is not unusual for (the inspection service) to monitor imported plants for two years before determining they may be permanently placed."

Gerard Araud, the French ambassador to the United States, confirmed to CNN the quarantine of the sapling, tweeting in April the roots were enclosed in a special plastic coating so as not to contaminate the White House soil.