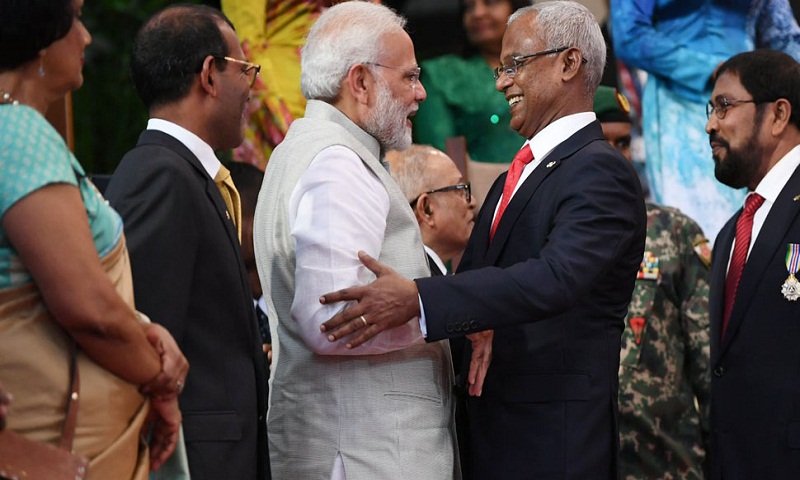 Maldives will confer its highest honour accorded to foreign dignitaries on Prime Minister Narendra Modi during his first foreign visit to the island nation after being re-elected for the second term in the Lok Sabha.

Maldives President Ibrahim Mohamed Solih has decided to bestow ‘The Most Honourable Order of the Distinguished Rule of Nishan Izzuddeen’, the Maldivian Foreign Minister Abdulla Shahid announced on Saturday.

“President @ibusolih has announced his decision to confer on PM of India H.E. @narendramodi the Maldives highest honour accorded to foreign dignitaries, 'The Most Honourable Order of the Distinguished Rule of Nishan Izzuddeen' during PM’s visit today. Namaskar, Swagatham,” Shahid tweeted.

PM Modi is on his first bilateral visit to the Maldives, after having a landslide victory in the recently-concluded Lok Sabha polls 2019. From the Maldives, he will go to Sri Lanka on Sunday.

"I am confident that my visit to the Maldives and Sri Lanka will further strengthen our close and cordial ties with our maritime neighbours, in line with our 'Neighbourhood-First Policy' and the vision of security and growth for all in the region," the prime minister said in an address on Friday.

Earlier today, PM Modi Modi offered prayers at Guruvayur Sri Krishna Temple in Kerala's Thrissur district before heading off to his first foreign visit after being voted back to power for a second term as the Prime Minister, reports Zee News.