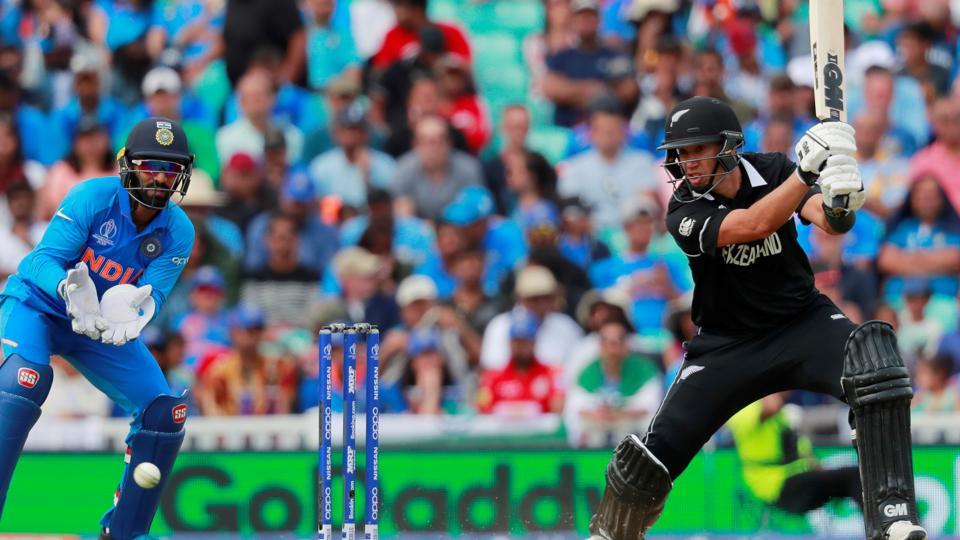 With everyone expecting 300-plus scores, India were bundled out for 179 in just 39.2 overs in their first warm-up game against New Zealand. Under overcast skies on a surface with plenty of grass cover, Trent Boult thrilled the fans at The Oval to end with 4 for 33. He was well-supported by Jimmy Neesham who strengthened his case for a first-team place with 3 for 26.

The New Zealand openers too fell early in the small chase but half-centuries from Kane Williamson and Ross Taylor helped them cruise to victory with six wickets and almost 13 overs to spare. Will the result affect India, one doubts it, but New Zealand definitely had a fruitful outing.

Kohli had the luck with the coin but India's top order had no answer to Boult who gave New Zealand a perfect start, striking not once, not twice, but thrice with the new ball.

First, he sent Rohit back with a swing bowler's two-ball trick. Boult pitched his first ball of the match on a length around off stump, Rohit played for the inswing and pushed his bat forward only to get beaten as the ball moved away after landing. The next ball pitched in line with the stumps and nipped back to trap Rohit lbw. The batsman opted for a review but replays confirmed the ball would have clipped the bails.

Boult deployed a similar strategy against Shikhar Dhawan, taking a couple of balls away from the left-hand batsman before bringing one back to find a faint inside edge.

With Vijay Shankar and Kedar Jadhav nursing little niggles, it was a golden chance for KL Rahul to stake a claim on the No. 4 spot. He had a tough initiation to his innings with Southee and Boult swinging the ball both ways. Southee even got one to beat the bat and hit the batsman on the pads. New Zealand reviewed the not-out lbw decision, but replays showed the ball would have missed the leg stump comfortably.

In the next over, Rahul drove Boult through the covers for a boundary. But the seamer pulled his length back the next ball, Rahul tried to dab towards third man only to deflect it on to the stumps. Rahul knew he had burnt his chances, his frustration reflecting in him kicking the ball as it ricocheted off the stumps.

With India reduced to 24 for 3, Kohli showed the way to bat in these conditions, standing outside his crease and taking a big stride forward to negate the swing. He not only survived but also hit a couple of crunching drives. However, it looked like he let his guard down against Colin de Grandhomme, and was bowled through the gate while trying to work a length ball from off stump towards midwicket.

Hardik Pandya, batting at No. 5, gave the team management some confidence with 30 off 37 balls that he can do more with the bat than just being a finisher. But his innings was cut short by Neesham, who got the batsman out caught-behind. Three balls later, Dinesh Karthik flicked a leg-stump half-volley straight down the throat of Ish Sodhi at fine leg.

Dhoni fell shortly afterwards, and soon India were struggling at 115 for 8. Ravindra Jadeja attacked his way to 54 off 50 balls, especially taking on the spinners, as he and Kuldeep Yadav added 62 for the ninth wicket but a brilliant low catch at point by Martin Guptill brought an end to Jadeja's innings. Boult then returned to wrap up the innings with Kuldeep's wicket.

A target of 180 was never going to challenge New Zealand, and perhaps it was also an opportunity for Colin Munro to get some runs under his belt. He started with a first-ball four but had no reply to swinging yorker from Bumrah and was lbw without adding any further runs. Guptill played some adventurous shots before holing out to Pandya for 22 off 28.

That brought New Zealand's two best batsmen - Williamson and Taylor - in the middle. Williamson had a slow start. He was 3 off 20, and then 23 off 50 as India placed a square-ish gully to cut off his favourite dab to third man.

But the New Zealand captain hit his stride after the spinners were brought on. He first square drove a Kuldeep googly before stepping out to loft the bowler over mid-off. Chahal was swept effortlessly over midwicket for a six as Williamson reached his fifty off 69 balls.

At the other end, Taylor rode his luck to a fifty of his own. When he was on 3, Yuzvendra Chahal failed to get under a skier, and then Karthik failed to latch on to a faint edge with the batsman on 41. But it didn't end there. When on 55, Taylor was stranded half-way down the pitch while going for a second run but Pandya missed a run-out opportunity as his wayward throw allowed the batsmen to make his ground safely. He eventually fell for 71 with the scores level but Henry Nicholls completed the formality with a single.