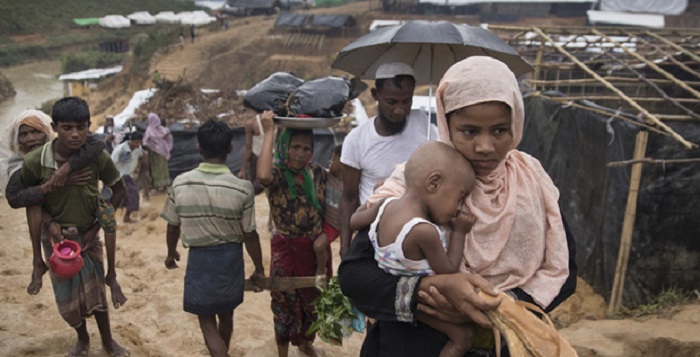 A large number of Rohingya people have become desperate to flee their camps in Ukhiya of Cox’s Bazar to abroad and other parts of the country for earnings.

Rohingya people are trying to flee from their camps to the neighbouring countries, risking their lives, sources at the Deputy Commissioner’s office in Cox’s Bazar said.

Even many Rohingyas have escaped their camps in the coastal area to other parts of the country to get better life.

Although law enforcement agencies rounded up many Rohingyas fleeing their camps, a significant number of the refugees are managing to reach their destinations.

Bangladesh is right now hosting over 1.2 million Rohingyas who were forcibly displaced from Rakhine of Myanmar amid the brutal persecution against them.

Law enforcement agencies are not being able to tackle such a huge number of Rohingyas in the refugee camps.

Taking the chance of such a situation, Rohingyas are spreading out across Bangladesh while many of them are desperate to flee to Malaysia by waterways in the Bay after managing fake passports.

During the last one month, law enforcement agencies detained around 500 Rohingyas from different parts of the country.

Many of the detainees were fleeing to Malaysia through illegal channel.

Sources said Rohingyas spend huge amounts to get passports and other means to escape their camps.

According to police estimates, around 58,000 Rohingyas have fled the camps in the past two years till May.

ABM Masud Hossain, superintendent of police in Cox’s Bazar, said Rohingyas have become desperate to get out of their camps in many ways.

As they are quite habituated with local lifestyle and language, it is little bit tough to distinguish them from locals and they are spreading.

Many of the Rohingyas are escaping their camps to go to Malaysia through the Bay of Bengal by risking their lives, he added.

Mentioning their limitation, the police officer said Rohingya camps are scattered, spanning a vast area and their refugees use jungles, hills and villages to escape which often tough to trace.

Stressing the need for more guard for the Rohingyas, he said they have a dearth of forces to guard a big chunk of the Rohingya population.

Right now they have two battalions of forces to oversee the Rohingya camps.

He said they have recommended that the government set up the fencing around the camps. The rationing system should be checked properly, too, to see how many of them are taking rations.

For instance of  Rohingya flee ration, it may mention that on May 18, law enforcement agencies in separate drives detained 84 Rohingya refugees in Pekua and Teknaf of Cox’s Bazar as they tried to cross the sea to Malaysia.

Even they are trying to spread in the capital. Detectives detained 23 Rohingya suspects from Khilkhet area on May 10.

On March 31, four Rohingya refugees were detained from Dhaka airport with fake passports while trying to travel to Indonesia.

Police sources said many Rohingyas are escaping their camps and some of them are falling prey to human traffickers.