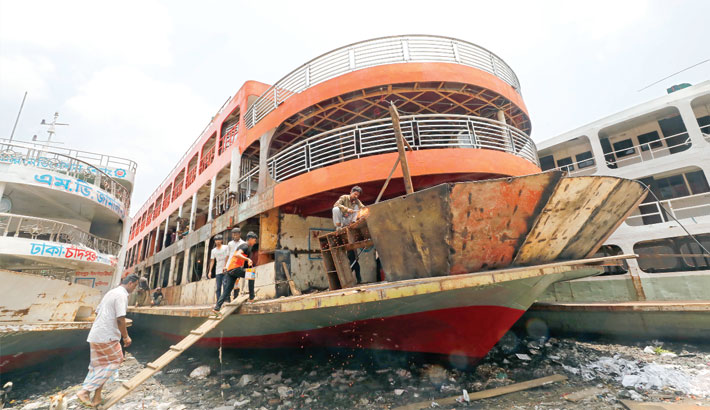 Old and unfit launches are being repaired at a Keraniganj dockyard on the outskirts of the capital on Tuesday ahead of Eid-ul-Fitr. Such launches are operated during the mad rush of holidaymakers on the occasion of the Eid festival. — Kamrul Islam Ratan

Worn-out launches are being given a facelift to attract passengers with the Eid festival approaching nearer.

Workers are busy doing the job at most of the dockyards in Keraniganj on the outskirts of the capital.

Many said such launches may put lives of homeward people in danger if they are allowed to ply waterways for Eid trips.

The run-down and faulty water vessels are being given a new face to attract passengers amid their frantic rush to their homes.

Experts said if worn-out launches are allowed to ply waterways, journey of holidaymakers may turn fatal.

A research conducted by Accident Research institute of Bangladesh University of Engineering and Technology  that analysed 264 maritime accidents between 2005 and 2017 that killed 1430 people, 58 percent accident occurred for collision.

Experts fear that plying fit and unfit launches simultaneously may result maritime accidents as passengers vessels compete among themselves to pick overboard their vehicle.

Besides, home-goers may have to face adverse weather during this hot summer season.

Boarding this sort of the launches may invite danger for holidaymakers.

During a visit, this correspondent found that around 27 dockyards in Keraniganj opposite to Sadarghat launch terminal are passing busy time to meet the demand from launch owners.

The correspondent found that some renowned launches, including Prince Awald 7, Morning Sun, JUbraz-7, Sabbir -2, Karnofuli-11, MV Yad, are being given a facelift.

Talking to the correspondent, workers at the dockyards said  launch owners getting major and minor fault fixed along with furnishing and  dying to give launches a new look.

They also informed for the last few days they have been doing the maintenance and furnishing job.

According to DOS sources, the Department of Shipping (DoS) handed over the annual fitness certificates to only 6, 159 of the 12,401 registered vessels, meaning the same number of the vessels, including launches, cargoes, oil-laden vessels, speedboats and dredgers, did not have the mandatory clearance.

Out of the 832 passenger carriers, 745 took the fitness test and passed, according to the department.

Talking to the correspondent, Manjurul Karim, chief engineer and ship surveyor of the Department of Shipping, said, “I can guarantee, the water vehicles, particularly passengers that have been ply on the waterways are registered with department of shipping and each of the vehicle has fitness certificate.”

Even, if anyone owner wants to get his vehicle to have maintenance they have to inform us which parts and why they will do so.

Besides, a number of teams including police, coast guard, surveyors, and inspectors have been monitoring the process so that no run down vehicle can ply on water ways, he also said.

He however, admitted that unregistered water vehicles also plying on a waterway which is putting lives under risk.

Ensure smooth ensure of holiday makers BIWTA has already held a meeting. It will ensure other measure to ensure to make the journey safe and sound, he added.