WC will be a different ball game: Mashrafe 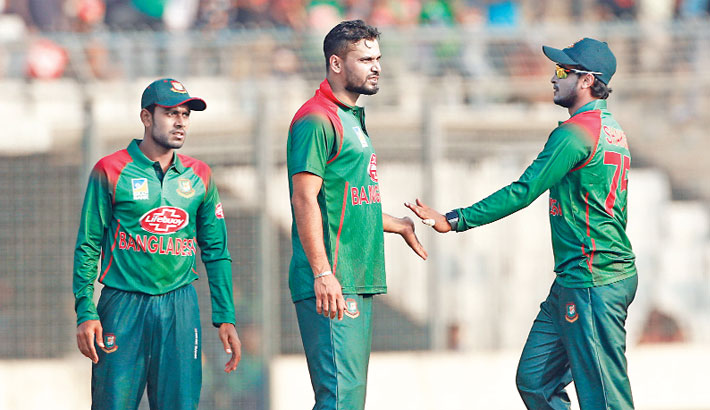 Bangladesh skipper Mashrafe Mortaza said that he is aware that expectations will be sky-high after their maiden win in multi-nation tournament but ICC World Cup will be a different ball game all together.

Bangladesh clinched their maiden major trophy in some style as they secured a 5-wicket victory over West Indies in emphatic fashion the tri-series final at Malahide Cricket Club Ground in Dublin last week.

Winning a major trophy remained elusive for Bangladesh for quite sometimes as they failed to clinch any trophy despite being contesting final in six occasions.

After their recent success in Ireland the expectation of their fans to do something similar in the global tournament looked to be the buzz in the cricket world considering their experience and strength.

“Whether we have raised the expectation (for the World after clinching the tournament) hardly matters. Even if we had lost badly in the tournament people would still be watching us with some kind of expectations. At least that is what my experience says after playing cricket for eighteen to twenty years. There was a time when people used to watch whether we can play well or some individual performs in the middle but that is not the case now. During the five to seven years people come and watch us with the expectation of coming out victorious. So they will not change the expectations,” Mashrafe told daily sun before returning back to London after completing a short trip to Dhaka following the triumph in Ireland.

“All I can say is that World Cup will be a different ball game. If you are following cricket in England you will see that runs are being scored heavily in England. It will be certainly different as far as the approach is concerned,” he said.

Mashrafe said that playing against South Africa, New Zealand and England in the opening three games seems to be extremely challenging for them.

Bangladesh is expected to open their account against South Africa on June 2 while they will take on New Zealand and hosts England respectively on June 5 and 8.

“It will be difficult for us because our opponents in the opening three games are extremely strong and to earn a positive result against them won’t be easy as they are used to those condition,” he said.

“It would have been helpful for us if it (tournament calendar) was little bit different. Any way there will be a different kind of satisfaction if we can come out and win those battles. We are excited to experience that feeling,” he added.

Mashrafe feels that Tigers have overcome the mental block of winning a final.

Bangladesh had their first major heart break when they failed to cross the last hurdle during their appearance in the first tri-nation final in 2009 involving Sri-Lanka and Zimbabwe.

Bangladesh’s second heartbreak was against Pakistan in the 2012 Asia Cup while four years later Bangladesh lost to India in Asia Cup Twenty20 final.

2018 seemed to be the most disappointing year for them as they lost final on three occasions. First, they lost the tri-nation series final against Sri-Lanka in January, Zimbabwe and followed that by losing against India in the Nidahas Trophy final. Bangladesh lost the Asia Cup final in 2018 that forced them to dawn the choker tag.

“I think we have overcome the mental block as far as playing in the final is concerned,” said Mashrafe.

“I am confident that we would reach the semifinal and from then onwards it’s all up to who plays well on that particular day,” he said.

While they removed chokers tag in style it also helped them complete their last preparation for the World Cup with huge amount of confidence under their belt. The way Bangladesh batsman played throughout the tournament indicated that they won’t shy away from trying to score heavily when they reach England for the upcoming ICC World Cup despite it was raised as the major concerning area for them considering they are not used to score at a pace unlike some of the other cricketing nation.

“We are playing with a mindset that we can chase down any runs from 300 to 350 considering the way we played in the tri-nation,” he said.

“At least now we are mentally prepared to chase or score over 300 runs against any opponents,” he concluded.