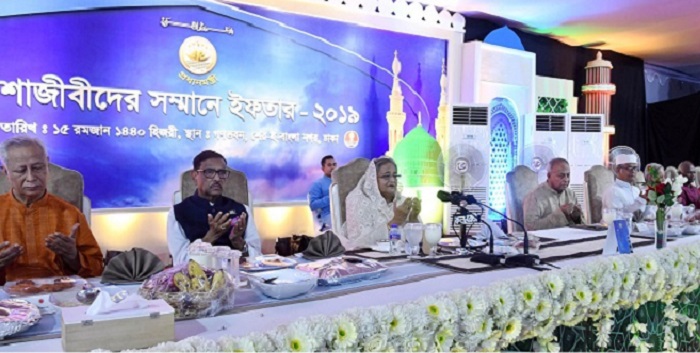 Prime Minister Sheikh Hasina on Tuesday urged all to work together keeping the peace and discipline unscathed to maintain the current pace of development in the country.

The minister made this call at an Iftar Mahfil hosted in honour of the leaders of various professional organisations at her official residence Ganabhaban in the capital.

"Our aim is to build Bangladesh as a prosperous, developed and peaceful country in South Asia. So, we’re carrying out our efforts to maintain peace and discipline in the country to keep up its development trend," she said.

Sheikh Hasina said it is not possible for a country to march forward without ensuring peace. “The government has been able to contain terrorism and militancy in the country, and the drive against these menaces will continue.”

The Prime Minister thanked law enforcement agencies for their relentless efforts in this connection saying that terrorism and militancy are a global problem, but in Bangladesh the government has been able to check it.

Mentioning that Bangladesh has been able to attain the recognition as a developing country, she urged all to work with united efforts for establishing the country as a developed and prosperous one.

She urged all to seek blessings of the Almighty so that peace and discipline prevail in the country.

"If we can maintain the trend of development we’ve started in Bangladesh, then all, including those living in rural areas, will get a beautiful, healthy and prosperous life. We’re praying for that and we’re working for that," she said.

Sheikh Hasina, also the chief of the ruling Awami League, said it is her all-time effort to make the people of the country fee from hunger and poverty, and reach the fruits of independence to every door of the country. "We want to build the country imbued with the spirit of the Liberation War."

The Prime Minister thanked the people of the country for having their trust and confidence in her to serve them again.

"I’m urging all to work from their respective positions to revive our glory that we had achieved through our independence but lost it after the brutal assassination of Father of the Nation Bangabandhu Sheikh Mujibur Rahman. Now we can place our country in a dignified position on the global stage," she told her audience.

Before the iftar, a special munajat (prayer) was offered seeking continued peace, progress and prosperity of the nation.

Prayers were also offered seeking the eternal peace of the departed souls of Father of the Nation Bangabandhu Sheikh Mujibur Rahman and other martyrs of the August-15 carnage and the martyrs of the Liberation War as well as the long life and good health of the Prime Minister.