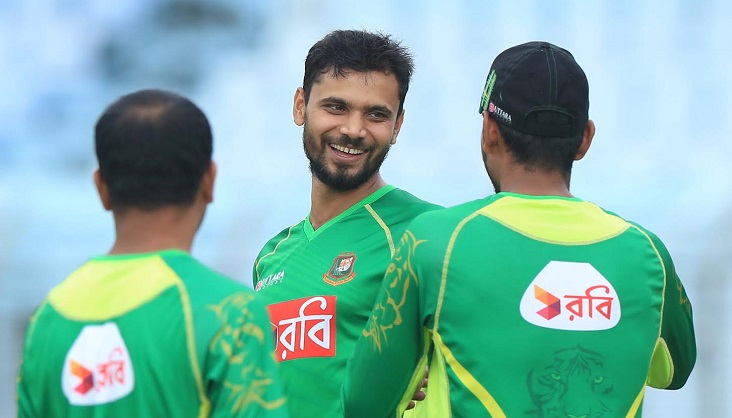 Bangladesh ODI captain Mashrafe Bin Mortaza and four other cricketers are set to return home after clinching the trophy of a multi-nation tournament for the first time beating West Indies in the Tri-Nation Series in Ireland on Friday.

Bangladesh's most successful skipper, Mashrafe, finally lifted the dream trophy on the seventh occasion overcoming their title drought in the last six finals in a decade.

Bangladesh team are scheduled to leave Ireland for England on Saturday (May 18) to take a six-day intensive training there till May 23 at their own costs ahead of taking hospitality as an ICC World Cup team in the UK.

Four cricketers of the Ireland-bound Bangladesh team are returning home along with Mashrafee.

Of them, Mashrafe, Taskin Ahmed and Nayeem Hasan were supposed to fly for Bangladesh on Saturday night (local time) while Farhad Reza and Yasir Rabbi on Sunday morning.

Besides, national opener Tamim Iqbal will fly for Dubai to spend vacation with his family members there and will join the national team in England on May 23.

Besides, national selector Habibul Bashar Sumon will join the national team in England on May 24.