Kamal Haasan reiterates Hindu terror remark in another rally, slippers thrown at him 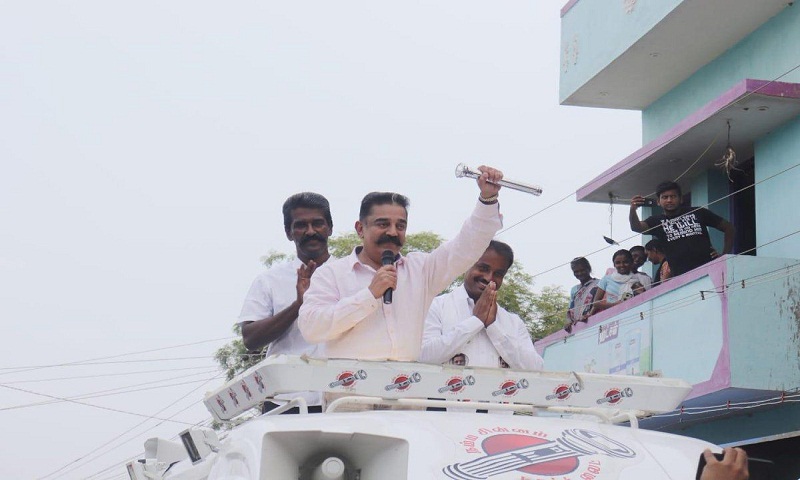 Slippers were thrown at Makkal Needhi Maiam (MNM) chief Kamal Haasan on Wednesday while campaigning in Thiruparankundram Assembly constituency for his party candidate contesting in May 19 by-election.

The attack comes days after Haasan had said that the “first terrorist of independent India was a Hindu” while referring to Mahatma Gandhi’s assassin Nathuram Godse.

According to a report in IANS, Kamal Haasan reiterated his Hindu terror remark at a rally in Thiruparankundram as well.

“In Aravakuruchi I said independent India’s first extremist was a Hindu. It is an historical truth,” he said.

Haasan said all his family members were Hindus and he would not talk in any manner to hurt their feelings.

According to him, people without listening fully to his speech at Aravakurichi were alleging that he was creating enmity amongst communities.

He said truth will always be bitter and that bitterness will turn into medicine.

According to reports, eleven people including BJP workers have been named in a police complaint on the slipper attack.

The police said that the workers threw the slippers while Kamal Haasan was addressing the crowd. However, the slippers did not hit him and fell on the crowd.

Haasan had triggered a major controversy on 12 May with a speech at Aravakuruchi assembly constituency of Tamil Nadu saying that the country’s first extremist was a Hindu while referring to Godse.

The BJP was quick to respond accusing him of appeasing the minorities. The party had on Monday moved the Election Commission seeking a five-day ban on him.

Meanwhile, Kamal Haasan on Wednesday filed an anticipatory bail petition before the Madras High Court, saying his speech was about Nathuram Godse only and not about Hindus as a whole.

Haasan moved the plea after the court earlier refused to quash an FIR against him, saying such pleas cannot be taken up as emergent petitions during the vacation and that if an anticipatory bail application was filed it could be taken up for hearing, reports The Statesman.