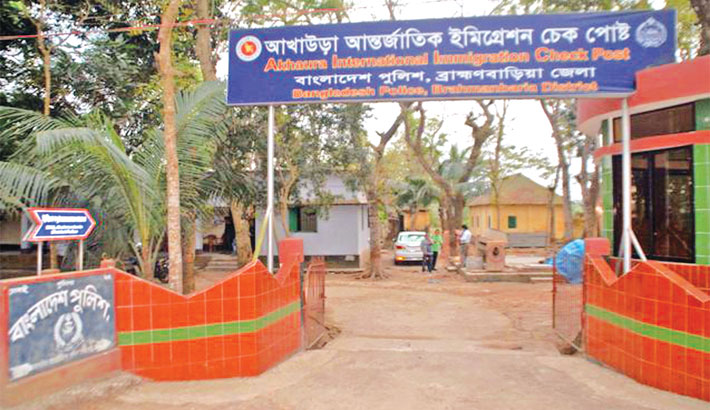 Spread over 15 acres of land on both sides of the international border, lies the neatly tucked away Akhaura land customs post where  movement of goods as well as travellers are on the rise consistently. While travellers by road are steadily rising, the volume and number of goods remains more or less same.

On an average, more than 800 tourists travel through this port every day increasing twofold during festival seasons forcing the customs and immigration offices to remain open till late hours. Cargo is not all that frequent primarily because, clearing and forwarding agents allege, “...of the limitation in the number of items allowed for export and import which are again mostly similar”. Md. Al Amin, an C&F agent cited a number of examples like dry fish, boulder, stone chips etc. Which are importable and at the same time exportable. The only items which are exported in volume from Bangladesh are cement and stone chips. Packed snacks like potato chips, chanachur, jhalmuri etc. used to be exported a lot previously but now the Bangladesh owners are believed to have set up production facilities in Tripura.

The facilities on the Indian side which boasts more than 11 acres outweighs those on the Bangladeshi side with meagre 5 acres of land with old buildings housing the customs and immigration department offices.

The Indian side of the border has seen some infrstructural growth recently like construction of drive-in warehouse, cargo storage facilities and parking area. The passenger terminal with customs and immigration all under one roof for incoming and outgoing travellers has been developed in the concept of international airports. The presence of a booth of the State Bank of India makes life easier for travellers wishing to change currencies. The Land Port Authority of Tripura recently introduced a small microbus to render free shuttle service for travellers with heavy baggage, travellers with disabilities, aged travellers and the like. This shuttle service, though for a very short distance, is quite popular among travellers especially during the rainy season. The travellers queue up for immigration and customs and seldom face harrassment.

On the other hand the immigration and customs department offices on the Bangladesh side are located in two separate places but within walking distance. The immigration section mostly remain chaotic in normal days as there is no queue for incoming or outgoing visitors and everyone tries to be ahead of everyone. The workforce of immigration personnel posted in the check-post are too few in number compared to the workload and mostly overworked. The living condition is really pathetic. All of them cramp into a single dormitory style room and take rest in turns.

The customs office is relatively small and becomes crowded when even a small number of incoming and outgoing visitors enters it together specially during rainy season. There are no signs or boards to show the way to the different offices and newcomers are often confused and have to seek guidance from locals.

The Border Guard Bangladesh personnel posted in the check posts  are too often not likened by both Bangladeshis and Indians as they frequently plough through the luggage of visitors treating everybody with suspicion.

The difference between the two sides of the border, be it in the infrastructural development or the mindset or both- are quite distinctive. If the condition of the washroom convenience (WC) is any indication than the Indian side will score top points undoubtedly. Mr. Shanti Baran Chakma, Revenue Officer of Akhaura Customs apparently is bent on removing the disparity on the two sides of the border and is confident of securing fund for refurbishment of the official quarters, office buildings, etc. from Dhaka to “..at least make the condition liveable and workable”. He intends to provide better facilities not only to the travellers but also those who visits the check post regularly for business purposes and social gathering during the ‘Flags Down’ ceremony every day at dusk. With no other place to live except his paternal home in Cox’s Bazar where he intends to return after retirement, Mr. Chakma hopes to get rid of the deprivation faced all these years by this important land customs port.

The writer is a senior journalist: [email protected]