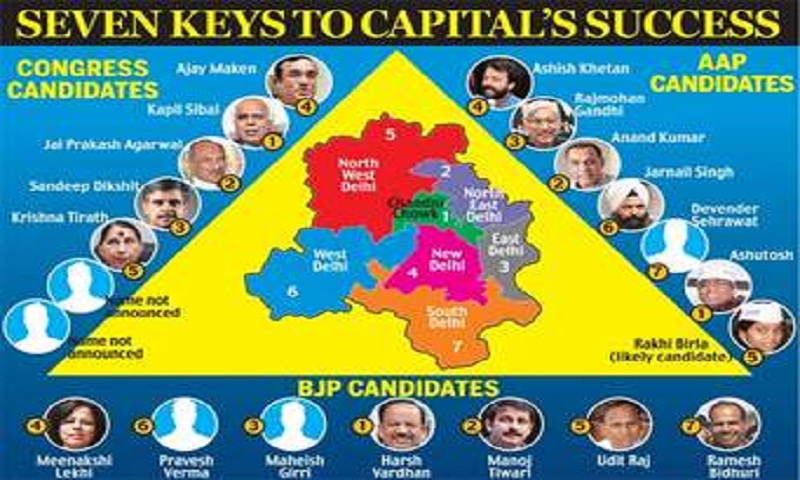 As many as 1.43 crore people are expected to vote on Sunday in a high-stakes triangular fight to elect Delhi’s seven Lok Sabha representatives, where the Bharatiya Janata Party (BJP) is looking to retain all seats, the ruling Aam Aadmi Party (AAP) trying to make its debut in the Lower House from the Capital and the Congress attempting to regain its lost base.

This election, which saw a high-pitched campaign replete with rhetoric, political defections, an assault on the CM, and even a couple of personal attacks, will be even more crucial as Delhi elects a new assembly in less than nine months — one of the reasons why for months, AAP and the Congress were trying to get into a seat-sharing pact and ensure their combined vote share increased and surpassed that of the BJP in the LS election.

Now that AAP and the Congress have failed to forge an alliance, the fight for the seven seats, presently held by the BJP, will be triangular.

In such a scenario, the BJP has an advantage, an analysis of the 2014 Lok Sabha election indicates. In that election, the BJP got 46.6% votes, AAP got 33% and the Congress 15% votes in Delhi.

Sanjay Kumar, director at the Centre for the Study of Developing Societies (CSDS), says the BJP is strong in this election and it will remain so in the 2020 Delhi assembly polls. “A decent performance on the seven seats is crucial for AAP. By decent I mean winning at least two seats, which would put AAP in a comfortable position for the state election next year,” he said.

“If the Congress also wins one seat or even improves its vote share, then the 2020 fight will be a close contest between the BJP, AAP and the Congress,” Kumar said.

The flip-flop over an alliance forced political parties to push back their campaigns. Such was the uncertainty that the BJP and the Congress had not even released their list of candidates till a few days before filing of nominations. AAP had announced its list way in March but said it was open to changes if the alliance talks came through.

Hoping to retain all seats, the BJP has given tickets to five of its sitting MPs. In two seats, it has fielded star candidates and first-timers — former cricketer Gautam Gambhir from East Delhi and Punjabi singer Hans Raj Hans from North West Delhi.

It is AAP’s second outing in the general elections — the first after it swept to power in Delhi in the 2015 assembly polls, winning 67 of the 70 seats. It has in the fray first-timers on all its seats and hopes to open its account with strong contenders such as Atishi (East Delhi) and Raghav Chadha (South Delhi).

The Congress has put its heavyweights in the fray, including three-time chief minister Sheila Dikshit from North East Delhi, former union minister Ajay Maken from New Delhi and four-time MP JP Agarwal, who is returning to Chandni Chowk, a seat he has represented thrice. Its star contestant is professional boxer Vijender Singh from South Delhi. Dikshit, the Congress’s Delhi chief, is contesting an election after 2013.

With the Congress and AAP contesting separately, a split in anti-BJP votes is inevitable, experts say. “The vote bases of the two parties are almost the same. Both AAP and the Congress are popular among Muslims, people in slums and unauthorised colonies and sections of the middle-class. The issues these parties are trying to address vary from class to class,” said Tanvir Aeijaz, political analyst and professor at Ramjas College.

AAP convener and Delhi chief minister Arvind Kejriwal has been telling people not to get confused with the Congress. “Every vote to Congress is a waste. It will split votes and work in favour of the BJP,” he said.

There were tense moments during electioneering when Kejriwal was physically assaulted by an individual during a roadshow in the New Delhi parliamentary constituency. A day after the attack, Kejriwal blamed BJP for the attack as Delhi Police, which is in charge of the CM’s security, is under the Centre’s control.

While the Congress and AAP are raking up sealing issue, the BJP is harping on national security and the Balakot airstrikes. AAP is also promising full statehood, the main theme of the party’s manifesto, if it wins all seven seats.

“But I feel this election is beyond issues like full statehood, civic amenities and even sealing. Despite the sealing drive, GST and demonetisation, there are traders who are supporting the BJP because of the Modi factor. So, this election is clearly about supporting Modi or being against him,” Aeijaz said.

While the BJP is open about seeking votes in the name of prime minister Narendra Modi, the Congress is stressing mostly on the work it has done in its 15-year rule in Delhi.