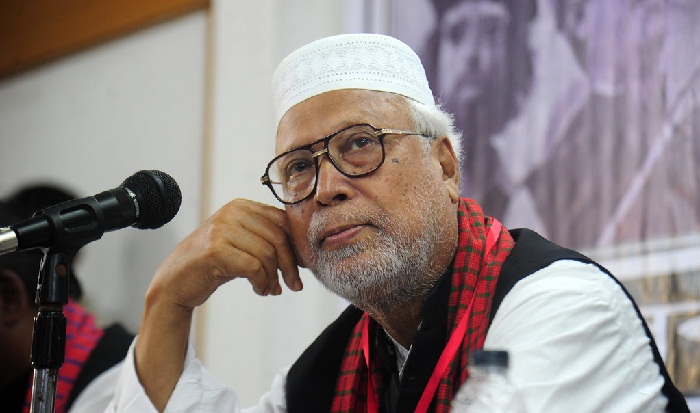 Veteran freedom fighter Kader Siddique on Thursday gave an ultimatum that his party Krishak Sramik Janata League (KSJL) will leave the Jatiya Oikya Front by June 8, if the prevailing division and inconsistency among the allies of this political platform are not solved within one month.

He came up with this announcement in a press conference held at the KSJL Motijheel central party office on Thursday noon.

Kader Siddique said, “After the election (11th general election), there raised many questions among the countrymen regarding some activities of Oikya Front. The leaders of the alliance failed to do their works in an appropriate way.”

He also criticised that authorities concerned in the alliance failed to stand besides the deceased and the injured in the violence during the last national election.

Criticising the 11th national election, Kader Siddique said, “There staged a nasty drama in the name of election on December 30, 2018.”

Kader also confessed that he got embarrassed and failed to answer about the oath-taking of BNP and Gano Forum MPs-elect, when asked by people.

“Later, five BNP MPs-elect also took their oath as Member of Parliament. This have made people confused,” He added

KSJL general secretary Habibur Rahman Talukder, among others, was present at the press conference.