Osama bin Laden: Eight years after his death, where is al-Qaeda? 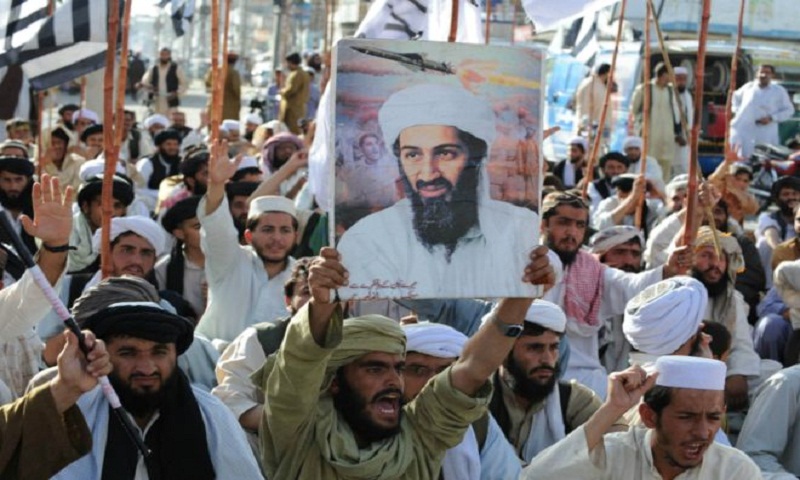 It is eight years since Osama bin Laden, the founder of al-Qaeda, was killed by US forces in the Pakistani town of Abbottabad.

The organisation he led was considered one of the deadliest jihadist groups in the world, commanding thousands of fighters.

It was also believed to have had considerable financial resources.

But with the demise of its leader and the emergence of the Islamic State group (IS), al-Qaeda's power and influence have weakened considerably.

So how influential is the group today, and what threat does it now pose to global security?

While IS has dominated the headlines in recent years, al-Qaeda has been pursuing a strategy of quietly rebuilding and forging alliances with regional groups.

In its latest report, US National Intelligence has warned that senior al-Qaeda leaders are "strengthening the network's global command structure and continuing to encourage attacks against the West and the United States."

The UN, in a report published earlier this year on the threat of global terrorism, said that al-Qaeda "appears to be growing more ambitious…it remains resilient and active in many regions and retains the ambition to project itself more internationally."

In February this year the UK's intelligence chief, Alex Young, also warned of a resurgence of al-Qaeda.

A fierce drone campaign by US forces, the killing of its leader and the challenge from the Islamic State group has forced al-Qaeda to adopt new tactics.

It has successfully fostered a network of affiliates or "branches" in Africa, the Middle East and South Asia.

These affiliates are local militant groups who are embedded in local communities and have sworn allegiance to al-Qaeda's leadership.

Unlike IS, al-Qaeda has been careful not to alienate local populations.

Part of its new strategy is to build local alliances and engage in community development projects.

In 2013 al-Qaeda issued a "General Guidelines for Jihad" which introduced significant reforms within the organisation.

The document, among other things, stresses a more restrained and community-based approach, instructing fighters to avoid behaviour which could trigger a "revolt of the masses."

"Al-Qaeda has made an art of homing in on local concerns, like corruption or marginalisation, and slotting them into its agenda of global jihad", according to Dr Elisabeth Kendall, senior fellow at Pembroke College, Oxford.

"In so doing, it acts a a local 'saviour' and positions itself as 'the good guys of jihad' as opposed to the brutal thugs of IS," she says.

Al-Qaeda has been steadily increasing its attacks through its various branches and affiliates.

In 2018 it carried out a total of 316 attacks around the world, according to data collected by The Armed Conflict Location & Event Data Project (ACLED).

Qaeda in the Islamic Maghreb (AQIM) Al- came into being in 2006 when an Algeria-based militant group affiliated with al-Qaeda. Following a crackdown by Algerian forces it has moved into the Sahel and West Africa.

Al-Qaeda in the Arabian Peninsula (AQAP) was formed in 2009 in a merger between two regional offshoots of the international jihadist network in Yemen and Saudi Arabia.

Al-Qaeda in the Indian Subcontinent (AQIS) operates in Afghanistan, Pakistan, India, Myanmar and Bangladesh, and was established in September 2014.

Jama'at Nusrat al-Islam wal-Muslimin (JNIM) is an al-Qaeda-affiliated organisation formed by the merger of several militant groups in Mali and West Africa.

Al-Shabaab is active in Somalia and East Africa and swore allegiance to al-Qaeda in 2012.

Hayat Tahrir al-Sham (HTS) is a merger of several Syrian militant jihadist groups, and has links to al-Qaeda, according to the UN. HTS currently controls Idlib province in northern Syria.

In a speech in 2015, al-Qaeda's current leader, Ayman al-Zawahiri, introduced a young man as a "lion from the den" of bin Laden's terrorist network.

That young man was Hamza bin Laden, a son of Osama bin Laden who is widely seen as the future leader of al-Qaeda.

The US has officially designated Hamza as a global terrorist and has offered a reward of up to $1m (£750,000) for information on his whereabouts.

The 30-year-old has been promoted as a rising star on pro-al-Qaeda websites, someone they hope will inspire the next generation of jihadists, and reinvigorate the group.

In recent years, he has released audio and video messages calling on followers to attack the US and its Western allies in revenge for his father's killing.

According to Lina Khatib, head of Middle East and North Africa at Chatham House, "the end of IS caliphate has pushed al-Qaeda networks to be more thoughtful and strategic about their operations.

"Al-Qaeda is more dependent now on having a strategic leader. This is helping Hamza Bin Laden to gain support in his bid to replace his father as al-Qaeda's leader," she says.