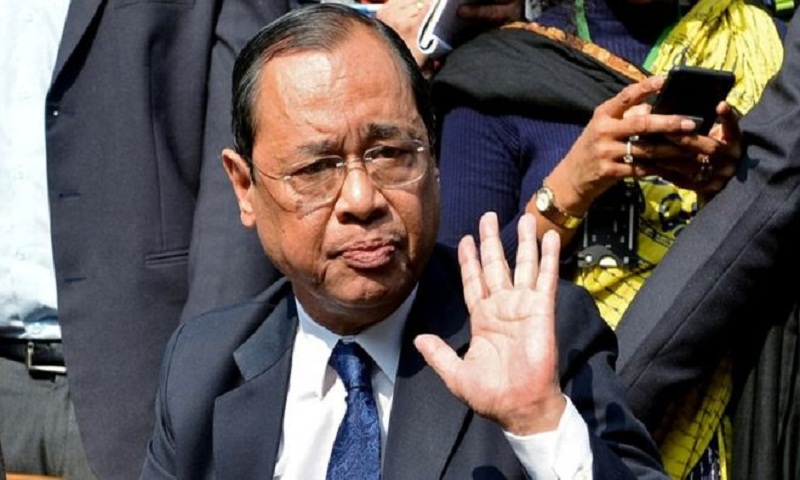 A woman who accused India's chief justice of sexual harassment has withdrawn from a court inquiry set up to investigate her allegations.

In a statement, she questioned its fairness and said she felt "compelled to walk out" over safety concerns.

Chief Justice Ranjan Gogoi said the "false and scurrilous" charges were an attempt to "destabilise the judiciary".

Mr Gogoi was sworn in as the chief justice on 3 October.

After she filed an affidavit detailing the alleged harassment on 19 April, the Supreme Court set up an "in-house committee" with three judges, including two women, to look into the allegations.

"I had hoped that the approach of the committee towards me would be sensitive and not one that would cause me further fear, anxiety and trauma," she said in her statement.

She also claimed that she was not allowed to bring a lawyer to the committee hearings, adding that there was no video or audio recordings of the proceedings.

What did the woman allege?

The allegations were filed in a sworn affidavit that was sent to Supreme Court judges.

In it the married woman, who cannot be named under Indian law, alleged the misconduct occurred on 10 and 11 October at the offices in Mr Gogoi's residence.

She alleged that Mr Gogoi "hugged me around the waist, and touched me all over my body with his arms" and pressed his body against her.

When he did not stop, she says, she "was forced to push him away from me with my hands".

The woman says Mr Gogoi then told her not to mention what had happened or her family "would be greatly disturbed".

She also said that her family was victimised after she refused the advances and that she was transferred three times, then fired in December.

What has Mr Gogoi said?

After the allegations surfaced, the first response came in a statement from the secretary general of the Supreme Court on the chief justice's behalf.

It said the allegations were "completely and absolutely false and scurrilous and are totally denied".

The woman "had no occasion to interact directly with the chief justice", it added.

The statement said she was dismissed "as per procedure" after an incident of "inappropriate conduct".

Mr Gogoi himself later addressed the issue in front of a special bench of the Supreme Court.

"I don't want to stoop so low as to answer these charges," he said. "All employees of the Supreme Court are treated respectfully by me."

He added: "There are forces that are trying to destabilise the judiciary. There are bigger forces behind these allegations hurled at me."