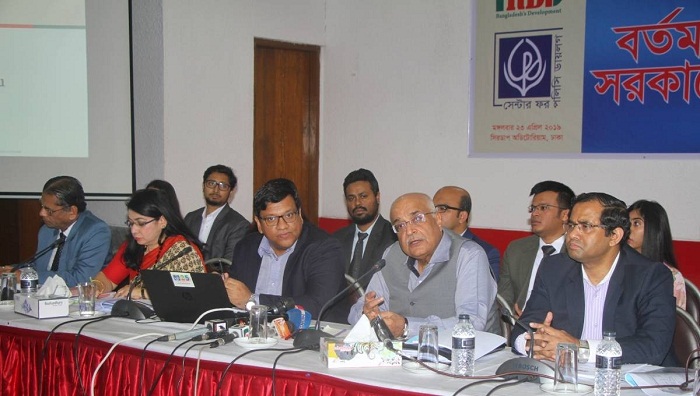 The Centre for Policy Dialogue (CPD) on Tuesday urged the government to publish the “actual data” based on which the GDP has been assessed.

CPD distinguished fellow Dr Debapriya Bhattacharya, however, appreciated the government for the steady GDP rise and expressed concern about other aspects of national development.

He was addressing a press conference arranged at Cirdap Auditorium in the city marking the launching of a report as part of Independent Review of Bangladesh Development research programme on the acts and assessment of electoral pledges of the government within the first 100 days of its rule.

“GDP is an important factor but not self-sufficient. All global development plans focus on human development. Even the SDGs have emphasised overall development of the stakeholders,” Debapriya said.

He said there was little private investment in the development efforts taken place during the 100 days. “All the variables connected to GDP don’t reflect the rapid GDP growth,” he told the press conference.

Debapriya noted that statistics showed an increase in labour productivity but surveys revealed that the working class’ income has not risen as discrimination is on the rise.

Data and statistics provided for the research are less reliable than before, he said. “We wish to see the information and data based on which the GDP growth rate has been determined,” the CPD fellow said.

CPD Distinguished Fellow Prof Mustafizur Rahman highlighted the importance of falling discrimination, saying that it is the only way to maintain sustainable GDP growth.

He also urged the government for larger budget allocation for education sector to develop skilled manpower.

She said CPD has planned to set up a banking commission involving citizens.

CPD Research Director Dr Khondaker Golam Moazzem mentioned that there are several complaints against reports on the newly-introduced companies in the capital market.

He also said the Anti-Corruption Commission is not taking adequate measures to tackle irregularities in the stock market.

CPD also made some recommendations for resolving the issues.