Fizz not be used too much in Ireland tri-series 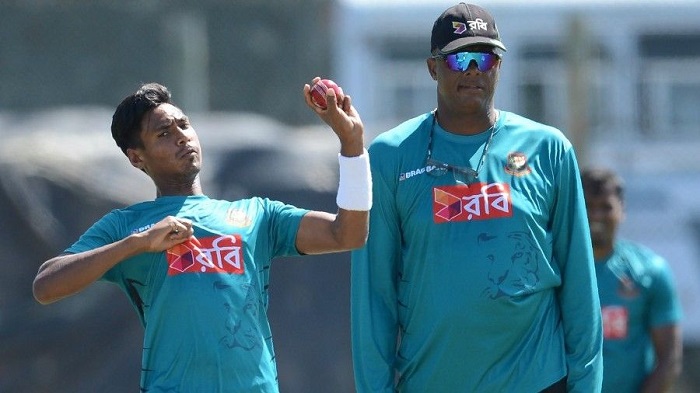 Bangladesh bowling coach Courtney Walsh wants fast bowler Mustafizur Rahman to be given enough time to recover from his ankle injury, and not be used too much during the tri-series in Ireland next month.

Walsh suggested that given Mustafizur's habit of picking up small injuries, he should be geared towards his work for the World Cup, which begins two weeks after the Ireland tour.

Speaking after the side's first training session in Dhaka before leaving for Ireland, Walsh was concerned about the injury worries to some of his pace bowlers.

Apart from Mustafizur, Rubel Hossain has a side strain while Mohammad Saifuddin is suffering from a tennis elbow. Even Abu Jayed is said to have picked up a niggle.

But it is Mustafizur who has had such an impact in the Bangladesh bowling line-up after the 2015 World Cup and is the biggest concern ahead of the next big event in England.

"[Mustafizur] has got a big role to play in the World Cup, once he is fit," Walsh said. "But I don't think we rely on any one player. Shakib [Al Hasan], Mash [Mashrafe Mortaza] and Rubel have been consistent. Fizz hasn't been as sharp since his injury, and he keeps picking up slight niggles. A fully fit Mustafizur can win games for you but we have to have him as fit as possible. We have a bit of time on our side. My concern is that I hope we don't over-rush him, and probably use him too much in Ireland, and he is not fresh for the World Cup.

"Out of the five we have three injured - Fizz, Rubel and Saifuddin, who has the tennis elbow. We need to get them back into bowling, within the right frame of mind, and be sharp enough to do a bit of bowling in Ireland and be ready for the World Cup. We have Taskin Ahmed, Khaled Ahmed and Shafiul Islam as well [for back-up]. You can probably say that we have them just in case we need them."

Walsh said that playing the tournament in England, where the pitches are mostly expected to help the batsmen, will require the pace bowlers to not just have skills, but also know when and where to use them. "It will be a big challenge. The World Cup is going to be long tournament," Walsh said. "There are going to be some good cricket wickets, which are batting-friendly. We have to be intelligent, and try to execute well.

"We have to read the conditions and the surfaces we play. Some places the ball might swing more than others. We have to assess when we get there. Most of the wickets will be docile and flat. We have to work on our variations and execution.

"Everybody studies one another these days, so they know our strengths and weaknesses. Likewise, we also know theirs. So it is about execution on the day, and try to be smart."

Walsh said that the progress shown by someone like Saifuddin, whose bowling has evidently improved in recent months, had excited him.

"He has come along tremendously. He has bowled very well," Walsh said. "He is a very excitable allrounder. His form in the domestic tournament has been very good. His confidence is quite good. He is keen to do what he is doing. If we can get him fully fit with the tennis elbow being solved, it will be a big plus for us as well."