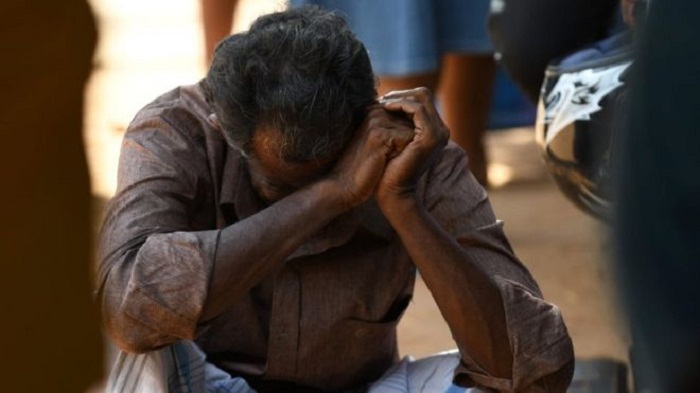 Police said that 24 arrests have now been made, but the government has not yet identified who carried out the attacks.

About 500 people are injured and dozens of foreigners are among the dead.

The country is in shock after the bombings, the deadliest violence since the end of the civil war in 2009.

There are reports of social media networks being temporarily restricted to try and stop misinformation spreading.

How did the attacks unfold?

The first reports of explosions came at about 08:45 (03:15 GMT) local time - with six blasts reported within a small space of time.

Three churches in Negombo, Batticaloa and Colombo's Kochchikade district were targeted during Easter services and blasts also rocked the Shangri-La, Kingsbury and Cinnamon Grand hotels in the country's capital.

As police hunted those responsible, two further explosions were reported

One blast hit near the zoo in Dehiwala, southern Colombo, and an eighth was reported near the Colombo district of Dematagoda during a police raid, killing three officers.

Late on Sunday, the air force said an improvised explosive device had been found and disposed of close to the country's main airport in the capital, Colombo.

"A PVC pipe which was six feet [1.8m] in length containing explosives in it was discovered," spokesman Gihan Seneviratne told local media.

What's known about the attackers?

It remains unclear who was behind the attacks, but 24 arrests were made by police.

The government has said they believe suicide bombs were used at some of the sites.

During a news conference on Sunday evening, Prime Minister Ranil Wickremesinghe addressed rumours that officials had had prior intelligence of forthcoming attacks.

"We must look into why adequate precautions were not taken. Neither I nor the Ministers were kept informed," he said.

"For now the priority is to apprehend the attackers," he added.