Rohingyas must go back to their homeland: PM 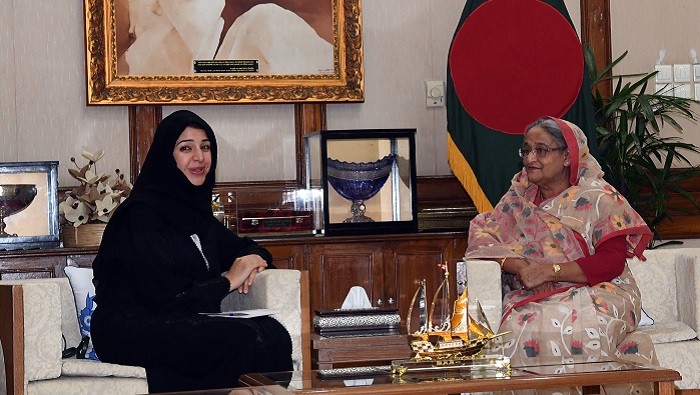 Prime Minister Sheikh Hasina on Friday reiterated her firm stance on Rohingya repatriation, saying the forcibly displaced Myanmar nationals must go back to their homeland.

The premier expressed her stern stance while talking to visiting UAE Minister of State for International Cooperation Reem Ebrahim Al Hashimy in this evening at her official Ganabhaban residence.

“The Rohingya nationals, who took shelter in Bangladesh, must return to their homeland of Rakhaine state in Myanmar,” Sheikh Hasina told.

He said that the prime minister briefly apprised the UAE minister of the present state of the Rohingya issue and said that Bangladesh government with many international agencies are helping the Rohingyas.

Sheikh Hasina also said that Bangladesh government is developing an island for providing temporary shelter to the Rohingyas with better facilities.

The UAE state minister assured her country’s continuous support to Bangladesh on the Rohingya issue.

She highly appreciated Prime Minister’s Sheikh Hasina’s humanitarian gesture of giving shelter to more than one million Rohingyas in Bangladesh with all possible facilities.

Reem Ebrahim Al Hashimy said that the bilateral relations between two countries are excellent and she will work to strengthen the ties further.

The prime minister and the UAE state minister discussed the issue of increasing flight frequencies of Emirates in Bangladesh.