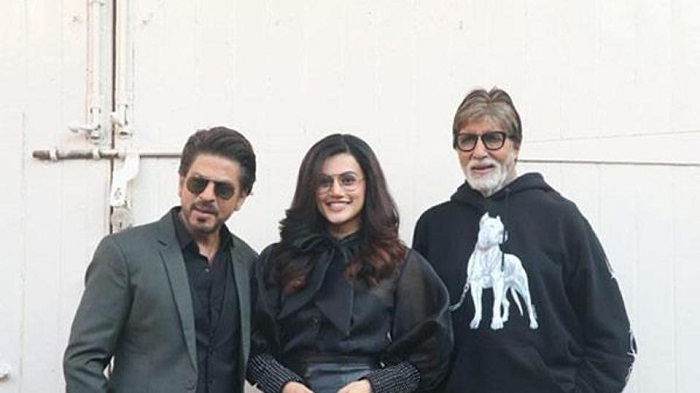 Even as actor Amitabh Bachchan and producer Shah Rukh Khan are busy passing the buck on a Badla party, with the senior actor even asking for a bonus after the success of the film, Taapsee Pannu has declared that she plans to celebrate the success of the film as soon as she gets back to Mumbai after finishing Saand Ki Aankh shoot.

Taapsee featured in the lead role in Sujoy Ghosh’s thriller Badla along with Amitabh that was produced by Shah Rukh’s Red Chillies. The film has surprised the trade analysts with an impressive box office collection. Amitabh pointed out the profit that the small-budget film has made and asked SRK to share some bonus with the creators, including himself, on Twitter.

Revealing that she is shooting in a remote village in Utttar Pradesh, Taapsee rued that no one brought a cake for her. “I have been shooting in Johri village in Meerut area since Badla released. Nobody has come here with a cake for me, so I have no idea what celebrations are going on and who is giving a party to whom. I know one thing for sure that when I come back to Mumbai, I will definitely treat myself with a cake or some party for sure for Badla being such a big success,” Taapsee said.

“I’ll try to invite everyone and they can stop arguing about it. That’s why I didn’t interrupt also. I was like, let me come back and I’ll throw a party,” Taapsee added.

Produced on a meagre budget of Rs 10 crore, Badla has earned more than Rs 86 crore at the ticket windows and is deemed a hit by trade analysts. Directed by Sujoy Ghosh, the film marked a reunion between Amitabh and Sujoy as well as Amitabh and his Pink co-actor Taapsee Pannu.