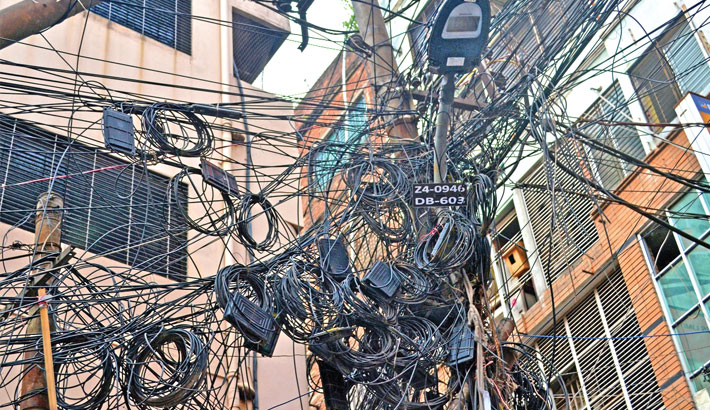 Dangerously tangled internet and dish cables are seen hanging with an electric pole in Mitford area of Old Dhaka. This is a common scene that spoils beauty and poses risk to the people. — sun photo

Electricity poles are being illegally used for stringing Internet and TV cables in the capital, posing a risk of accidents.

A huge quantity of cables is seen hanging overhead on roads, especially in commercial areas of Motijheel, Karwan Bazar, Banani, Mohakhali and Gulshan.

A similar scenario is seen also in Dhanmondi, Mirpur, Farmgate and Shahbagh areas.

Pedestrians said overhead cables disrupt their movement on the narrow streets in Babubazar, Islampur, Kaptan Bazar, Shyampur, Nawabpur, Wari and many other areas.

Such wires are also found on the ground. Public movement on the streets get obstructed due to the cables.

The scattered cables not only damage the beauty of the capital city but also cause accidents.

Sometimes electrocution takes place from these cables. Fire can spread from the hanging cables to houses or offices connected to them.

If any fault occurs on internet cable, internet service providers repair it without removing the old one, thus adding to the jungle of overhead cables.

In 2009, the government planned to take all types of wire, including that of power distributors, cable TV operators, internet service providers (ISPs), and mobile and telecom companies underground.

Under the Nationwide Telecommunication Transmission Network (NTTN) project, licences were given to two organisations — [email protected] and summit communications — to set up infrastructure for managing underground operations.

It is decided that different organisations will provide their services through this underground cables.

The country’s ISP and NTTN operators have long been engaged in a blame game for not using the infrastructure.

Muhammad Aminul Hakim, president of the Internet Service Providers Association of Bangladesh (ISPAB), told the daily sun: “Two NTTNs are doing monopoly business. They are charging very high as there is no regulation for pricing.”

“We provide internet service to our clients at low cost which is likely to come down furthe. At present, ISPAB provides 10mbps speed internet at a cost of only Tk 1,000,” he added.

“But the tariff will increase manifold if most of the cables go underground,” he said.

He said: “The two NTTN companies do not have adequate distribution points. As a result, the internet service providers are compelled to provide connections to different organisations through overhead cables.”

He also said that the DPDC has already taken its overhead cables beneath the ground in Dhanmondi under a government-to-government project.