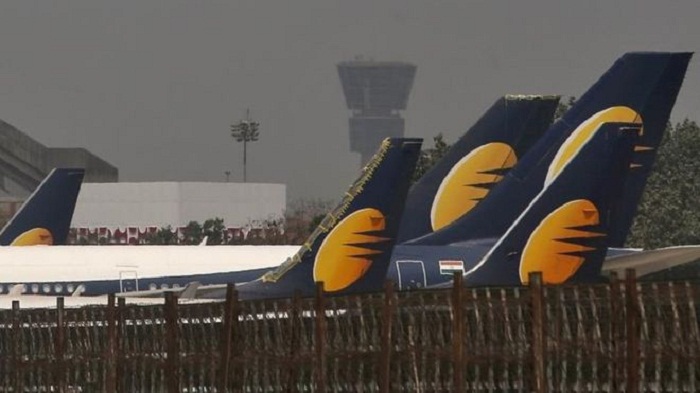 The airline said its last flight would operate on Wednesday as it was not able to pay for fuel and other critical services.

Jet Airways said it had no choice but to suspend the flights, but hopes to start flying again.

With 123 planes, Jet Airways is India's biggest private airline, but reports say that just five planes have been in use.

In a statement the airline said it had been forced to ground all its flights because "prolonged and sustained efforts with lenders and authorities did not yield the desired results".

The Indian government had asked state-run banks to step in with a bailout plan for the airline - which employs 23,000 people and was founded by Naresh Goyal more than 25 years ago. He stepped down as chairman last month.

Pilots, engineers, and ground staff have not been paid for months, and passengers have been left stranded around the world as a result of cancellations.

"Late last night, Jet Airways was informed by the State Bank of India (SBI), on behalf of the consortium of Indian lenders, that they are unable to consider its request for critical interim funding," the airline said.

"Since no emergency funding from the lenders or any other source is forthcoming, the airline will not be able to pay for fuel or other critical services to keep the operations going. Consequently, with immediate effect, Jet Airways is compelled to cancel all its international and domestic flights. The last flight will operate today," it added.

Jet's last flight before the suspension departed from Amritsar and as the flight took off the brightness of the iconic Golden Temple was visible through the night sky.

It was an emotional last journey for the crew and even for the ground staff.

"The sun will rise again," the pilot told me before he took charge. He had worked for the airline for 17 years and was hopeful of reprieve.

Many people didn't even bother turning up for the flight, mistakenly believing this would be cancelled too but for those who did make it on board there was a palpable sense of community and concern for the staff of Jet Airways.

Passengers asked cabin crew what was to happen to their jobs, where they would go from here. There have been no clear answers for Jet staff - and many felt a deal would come through, but worry was nevertheless etched on their faces.

Many were asking questions about their onward journeys and felt frustration at the state of India's airline industry, remembering the fate of Kingfisher Airlines.

Yet others booked tickets on this particular flight just to make history.

Before the flight touched down, the pilot spoke a few optimistic words to the passengers telling them this may be the last flight for now, but he very much hoped they would fly Jet once again.

The banks have been seeking a bidder for the airline, which said it would continue to support them in their efforts.

Etihad Airways already owns 24% of Jet Airways and is reported to have expressed an interest in taking more control.

"Jet Airways is hopeful that it will be able to bring the joy of flying back to its guests as soon as possible," the airline said.

The carrier operated 600 domestic and 380 international routes, including out of London, Amsterdam and Paris, and had grown rapidly before it started to lose market share after the entry of low-cost airlines like IndiGo & SpiceJet.

The UK's Civil Aviation Authority tweeted advice to customers, outlining different approaches for seeking refunds depending on how the flight was booked.

Jet Airways had said earlier on Wednesday it was working to "minimise guest inconvenience" by using its contact centres and social media teams.

"In parallel, the airline's management and its key stakeholders including its consortium of lenders, continue to work closely towards resolving the current situation," a spokesman had said.

"The airline regrets the inconvenience caused to its guests," they added.