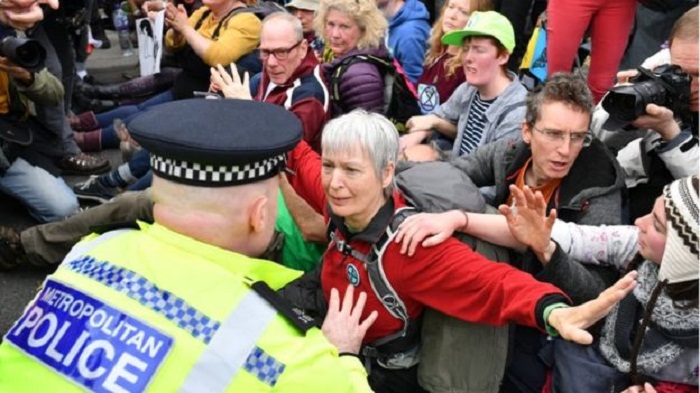 The Met said 290 people had been arrested. During protests in Edinburgh, 29 arrests were made.

Organisers said protests had been held in more than 80 cities across 33 countries.

In London, motorists face gridlocked traffic on a number of alternative routes, such as Westminster Bridge and Blackfriars Bridge.

Transport for London warned bus users that routes would remain on diversion or terminate early.

Mayor of London Sadiq Khan said although he "shared the passion" of the activists, he was "extremely concerned" about plans some had to disrupt the Tube on Wednesday.

"Ongoing demonstrations are causing serious disruption to public transport, local businesses and Londoners who wish to go about their daily business," Ch Supt Colin Wingrove, of the Met, said.

Campaigners have been ordered to restrict their protests to Marble Arch after they caused widespread disruption on Monday. That order will continue until 21:10 on Friday.

Three men and two women, in their 40s and 50s, arrested on suspicion of criminal damage at Shell's headquarters in London on Monday, have since been released while inquiries continue.

The majority of the other protesters detained have been held on suspicion of public order offences. Mr Khan said it was "absolutely crucial" to get more people to use public transport to tackle climate change, and urged the protesters not to disrupt the Tube.

"Targeting public transport in this way would only damage the cause of all of us who want to tackle climate change, as well as risking Londoners' safety, and I'd implore anyone considering doing so to think again," he said.

What is Extinction Rebellion?

Since its launch last year, members have shut bridges, poured buckets of fake blood outside Downing Street, blockaded the BBC and stripped semi-naked in Parliament.

It has three core demands: for the government to "tell the truth about climate change", reduce carbon emissions to zero by 2025, and create a citizens' assembly to oversee progress.

Controversially, the group is trying to get as many people arrested as possible.

One of the group's founders, Roger Hallam, believes that mass participation and civil disobedience maximise the chances of social change.

But critics say they cause unnecessary disruption and waste police time when forces are already overstretched.

The second day of action included speeches at Parliament Square about how to tackle climate change.

Oxford Circus is usually one of the busiest crossroads in London, but only scores of protesters and bemused onlookers can be found in the middle of the road today.

Children as young as six are making use of the freshly-drawn hopscotch, running around the tents and flying colourful banners.

One campaigner, who attended the protest with her two children, says she was protesting for the people who are "the most vulnerable, and least responsible for climate change".

Her nine-year-old daughter says she wishes her school taught her more on the issue.

Most protesters say the police have been encouraging - despite the number of arrests - although taxi drivers and shoppers complained of the disruption.

The government said it shared "people's passion" to combat climate change and "protect our planet for future generations".

The Department for Business, Energy & Industrial Strategy said the UK had cut its emissions by 44% since 1990.

A spokesman said: "We've asked our independent climate experts for advice on a net zero emissions target and set out plans to transition to low emission vehicles and significantly reduce pollution through our Clean Air Strategy."