A fire that devastated Notre Dame Cathedral in Paris is under control, officials say 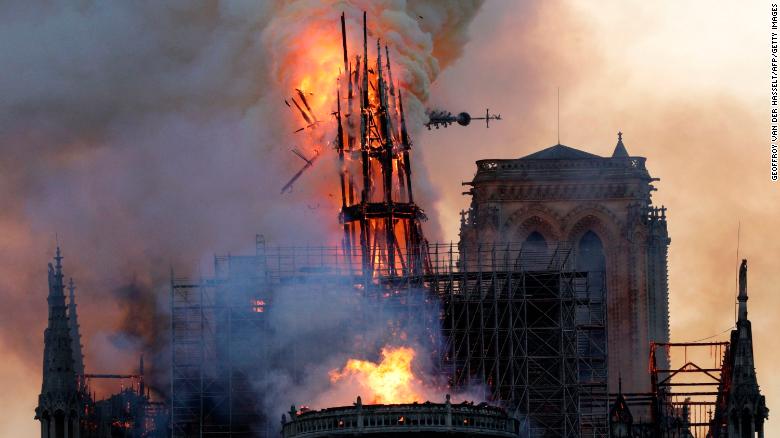 Parisians raised their voices in song Monday night outside Notre Dame Cathedral as a massive blaze engulfed one of the city's most revered historic sites.

The fire burned for several hours Monday, causing the collapse of the cathedral's iconic spire and the destruction of its roof structure, which dated back to the 13th century.

Consumed by flames, the spire leaned to one side and fell onto the burning roof as horrified onlookers watched.

By early Tuesday morning, officials said the fire was under control and several invaluable artifacts had been rescued from the burning cathedral.

French President Emmanuel Macron praised firefighters for saving the cathedral's iconic facade and towers, saying "the worst has been avoided."

Yet he lamented the damage already done to "the cathedral of all French people." He pledged to launch an international fundraising campaign to rebuild the cathedral.

"Notre Dame is our history, it's our literature, it's our imagery. It's the place where we live our greatest moments, from wars to pandemics to liberations," he said.

"This history is ours. And it burns. It burns and I know the sadness so many of our fellow French feel."

At least one firefighter injured

For much of the day, flames and thick plumes of smoke billowed from the cathedral, including the bell tower and the spire. Rescue workers rushed to evacuate artworks.

It was not immediately known what caused the fire. The cathedral is surrounded by scaffolding amid construction work. Paris Fire Brigade Commander General Jean-Claude Gallet said the initial call to emergency services notified authorities of a fire in the attic of the cathedral.

About 400 firefighters were mobilized to deal with the blaze, the French Interior Ministry said. Firetrucks had difficulty accessing the scene, located on an island in Paris, amid the daily afternoon rush hour. Police urged the public to avoid the area.

Firefighters atop cherry-picker cranes sprayed water onto the church in an attempt to calm the flames.