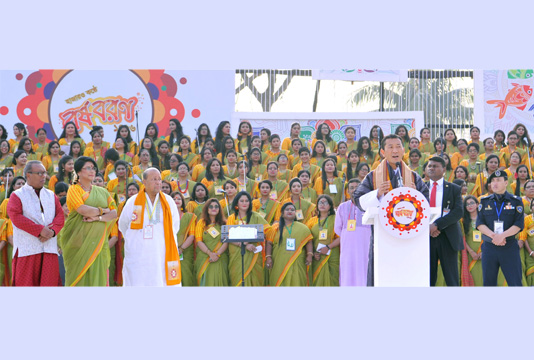 The Bhutanese premier attended one of the “Naba Barsha (new year)” celebrations jointly organised by Shurer Dhara, a cultural organisation and Channel i, a private television channel, at Bangabandhu International Conference Centre (BICC) in the capital in the early morning.

The Bhutanese premier was mesmerised by the performance of Shurer Dhara led by internationally renowned singer Rezwana Chowdhury Bannya.

After enjoying different songs, one in Bhutanese language, Lotay greeted the people gathered on the occasion to celebrate Bengali Happy New Year.

The Bhutanese prime minister expressed his happiness as he was able to join the biggest festival of Bangalees. “I would like to greet you happy New Year from deep of my heart,” he said in Bangla.

“I spent seven years in Mymensingh and four years in Dhaka …. Bangladesh is as like my second home,” Lotay said.

Later, the foreign minister told newsmen that when Bhutanese Prime Minister was scheduling his visit here, Bangladesh proposed him to come here during the Pahela Baishakh. “He (Lotay) keenly accepted the proposal and rescheduled his visit,” Momen added.