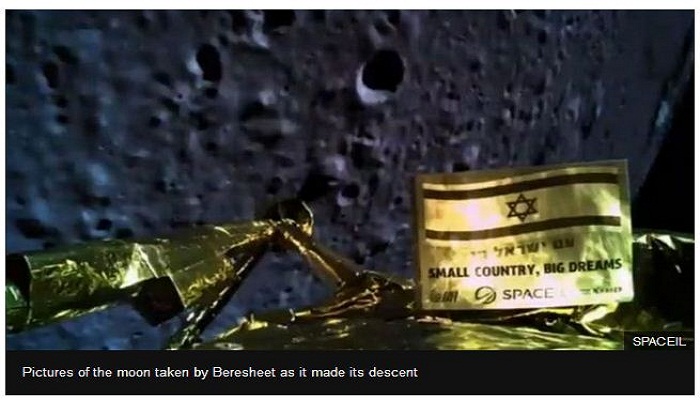 The malfunction triggered a chain of events that eventually caused its main engine to switch off.

Despite a restart, this meant that the spacecraft was unable to slow down during the final stages of its descent.

The Israeli spacecraft was the first privately funded probe to attempt a soft landing on the Moon.

The engineering team at SpaceIL and Israel Aerospace Industries (IAI) said that the first technical issue occurred 14km above the lunar surface. This would have been moments after it sent a selfie of its descent.

The final telemetry reading from the spacecraft revealed that 150m above the lunar surface, the spacecraft was moving at about 500km/h (300mph). At this speed a crash landing was inevitable.

The Beresheet scientists have not specified the faulty component, but during the descent the spacecraft's inertial measurement unit reset - this assesses the orientation and velocity of the probe.

This early investigation does suggest that the main engine, which had been built in Britain, was not the primary source of the failure.

Robert Westcott, a senior propulsion engineer at Nammo Westcott, said: 'It appears that a glitch, perhaps with a sensor, may have caused the on-board computer to erroneously shut down the main engine.

"By the time they had reset the system and the engine successfully restarted it was too late to slow the lander down for the soft landing.

The team said more tests would be carried out next week to gain a better understanding of the events. Nasa's Lunar Reconnaissance Orbiter Camera (LROC) may also be able to take an image of the crash site.