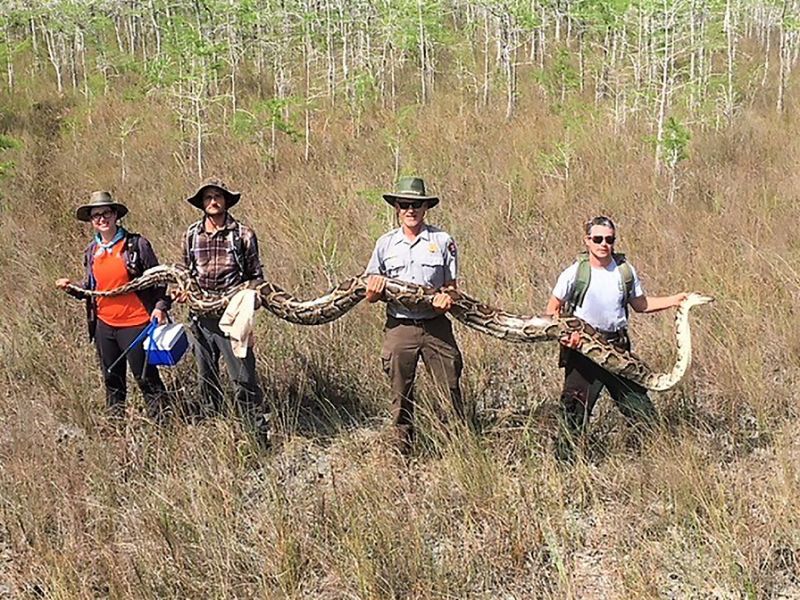 Researchers in Florida using a new approach to combating a destructive invasion by enormous pythons have captured one of the biggest ever, a 17-foot-long (5.2 meters) specimen large enough to eat a deer, they said.

The female snake is longer than a one-story building is high, and weighs 140 pounds (64 kilograms).

It is one of the biggest pythons ever caught in southern Florida, according to a post on the Facebook page of the Big Cypress National Preserve.

The researchers found the enormous reptile by using male pythons fitted with radio transmitters, allowing them to track the male and locate breeding females, according to the post.

“The team not only removes the invasive snakes, but collects data for research, develops new removal tools and learns how the pythons are using the preserve,” the park said.

The 17-footer was found to contain 73 developing eggs. The reptiles have no natural predators in Florida and multiply rapidly, posing “significant threats to native wildlife,” the researchers said.

The snakes can decimate native wildlife, killing small animals like rabbits, birds and opossums, and even eating creatures as large as alligators and adult deer.

The Burmese python is considered an invasive species since it first appeared in the area in the 1980s.

With anywhere from 30,000 to 300,000 pythons now in southern Florida, the US Interior Department banned their importation in 2012.

The Florida Fish and Wildlife Conservation Commission has sponsored hunting programs to target the reptiles.

But such efforts have failed to slow their spread, and the commission in 2017 held hearings around the state to seek creative ideas for containing the monstrous creatures.

Another idea — introducing mongooses, which are famed in Asia for their ability to kill cobras — came from one Victoria Olson of Fort Lauderdale.

“They have been successful in Puerto Rico & The US Virgin Islands to eradicate snakes and yes, they can kill a python,” she said, according to the Sun-Sentinel newspaper of Fort Lauderdale.

Pythons are not known as being particularly brainy. Since some have choked to death on golf balls they thought were eggs, one man suggested setting out hundreds of fake eggs.

Asked about such ideas, a state wildlife spokeswoman noted diplomatically that public input is greatly valued.

But, she told the Sun-Sentinel, “we want to give each suggestion the time for evaluation it deserves.”