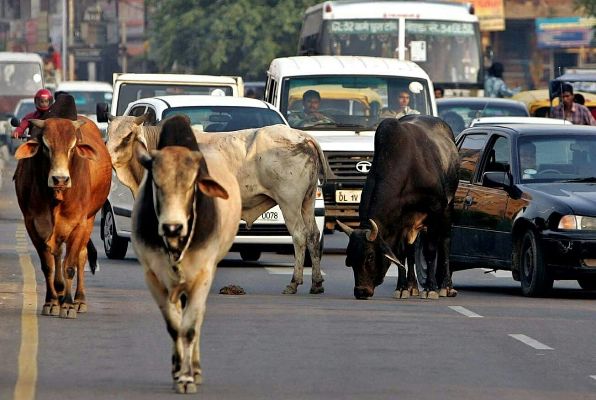 Cows roam on Indian streets. Because of self-proclaimed cow protectors in India no one dares touch the cow now. Photo: collected

One of Indian Prime Minister Narendra Modi's signature policies has been protecting cows, but for Raghuvir Singh Meena -- a Hindu farmer struggling to protect his crop of chickpeas from roaming cattle -- it has gone too far.

Farmers overwhelmingly supported Modi's nationalist party when he swept to power in 2014 but the strict measures on cows, which are sacred to Hindus, have caused major headaches for rural communities.

"We have tried everything -- scarecrows and barbed wire -- but the stray animals never miss a chance to eat away our crop," Meena told AFP, looking askance at his lush fields in the Pilani district of Rajasthan in western India.

"They (the government) are playing their politics, they don't care about poor farmers," he said ahead of elections beginning on April 11, when Modi will run for a second term.

Even before Modi came to power, cow slaughter and the consumption of beef was banned in Rajasthan and many other states in officially secular India, which also has substantial Muslim and Christian populations.

But laws are now applied more strictly and punishments have increased. In 2017 the government tried to ban the cattle trade for slaughter nationwide, only for it to be rejected by the Supreme Court.

Critics say Modi's Bharatiya Janata Party (BJP) is on a mission to impose "Hindutva", the hegemony of Hindus, on 1.25-billion-strong India.

They also warn that the BJP has emboldened fringe Hindu vigilante groups to attack minority Muslims and low-caste Dalits with impunity for eating beef, slaughtering and trading in cattle.

Incidents of mob lynchings have spiked, with 44 people -- including one in Rajasthan -- killed in cow-related attacks between May 2015 and December last year, says Human Rights Watch.

The BJP says it opposes all violence, but even the fear of attack and tougher laws have badly disrupted the cattle trade.

This has led to farmers abandoning old and infirm cows instead of selling them for slaughter, resulting in more bovines on the loose -- causing road accidents and wreaking havoc in rural areas, where 70 percent of Indians live.

The number of strays was put at 5.2 million in a 2012 livestock census --- which is carried out every 10 years, just as for people -- but the numbers are believed to have shot up since.

Wandering cattle, often eating plastic rubbish or ruminating at busy traffic intersections, have become a much more common sight in India's towns, villages and cities since Modi came to power.

In 2015, the last year for which government figures are available, more than 550 people were killed in accidents involving stray cattle.

"Because of these cow protectors no one dares touch the cow now," said Sumer Singh Punia, a former village head in Churu district.

"There are not enough cow shelters and the ones that are there they are so overcrowded that each day one animal dies," he told AFP.

"We are Hindus, we don't want to hurt the cow but we can't afford to keep and feed so many strays when we are struggling ourselves to make ends meet."

Voter unhappiness was already evident when the BJP lost state elections in the largely agricultural states of Rajasthan and Madhya Pradesh in December to the opposition Congress.

The country's only dedicated "cow minister" in Rajasthan was also booted out.

It was a major turnaround from 2014 when the country's 262 million farmers largely backed the BJP, which has promised to double farm income by 2022.

Some villagers are now pooling money from their modest savings to herd the strays into makeshift shelters, at least through the harvest season.

In December and January, exasperated farmers across the northern state of Uttar Pradesh locked up stray cattle at district schools to protect their crops, meaning lessons had to be held outside.

Sandeep Kajla, head of the Gramya Bharat Jan Chetna Yatra, a social organisation based in Pilani, said political parties must include the issue of stray cows in their election manifesto.

"One farmer can look after one animal. But here, cows are roaming around in hundreds," he said.

Gurpreet Mahajan, a professor at the Delhi-based Jawaharlal Nehru University, said the BJP had been caught on the hoof by the fallout.

"I don't think everyone has thought through how to deal with this particular symbol (of cow) and make it a reality," she said.