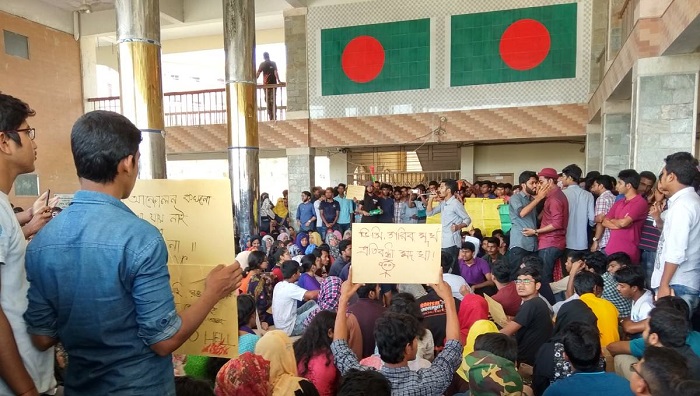 In a press statement signed by university public relations officer Faisal Ahmed, the VC requested the media to publish his apology saying that his recent remark was misunderstood by the students.

“Unambiguously, I want to say that I didn't call the students ‘razakarer bachcha’… I only said if anyone tries to foil any programme on Independence Day, he or she would be razakarer bachcha,” the VC said in the statement.

“Even then, I apologise if any of my students got hurt by the statement, and I seek cooperation from them in running the university’s academic activities smoothly as before,” he said.

On Tuesday, students started demonstrations claiming that the VC arranged the Independence Day programme on the campus without inviting students, and when they protested this action, he called them 'razakarer bachcha' (kids of Pak collaborators).

Later on Thursday, the authorities shut down the university for an indefinite period amid student protests.

According to the notice, the university will remain closed for an indefinite period from March 28 for the sake of security of its students, teachers, staff as well as the law-and-order situation in and around the campus. The students were also asked to vacate their residential halls and dormitories.

Though they left the campus, students intensified their protests, demanding the VC’s resignation.

Meanwhile, on the fourth consecutive day on Friday evening, students brought out a torch procession from the university’s Central Shaheed Minar and demonstrated taking position on Barishal-Patuakhali road in front the VC residence for a while.

Later, the agitating students burnt an effigy of the VC and chanted slogans demanding his resignation.