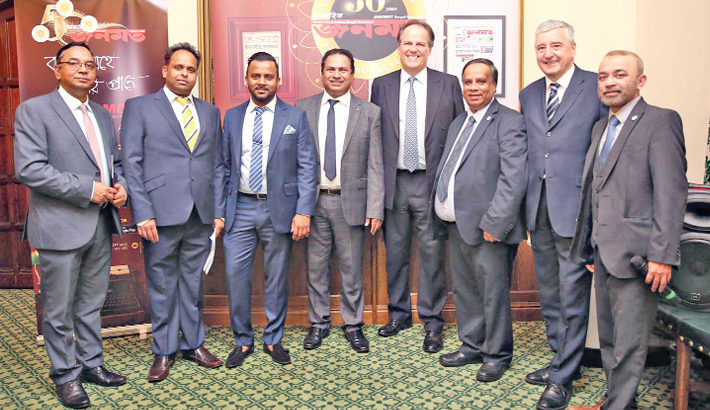 A team of Janomot, UK’s Bengali news weekly, poses for a photo with Minister of State for Asia and the Pacific at the UK Foreign and Commonwealth Office Mark Field and Poplar and Limehouse MP Jim Fitzpatrick at its golden jubilee celebration at the Commonwealth Parliamentarian Association room of the House of Commons of the United Kingdom recently. - SUN PHOTO

The golden jubilee of the Britain’s leading Bengali newsweekly ‘Janomot’ was celebrated in the UK recently amid huge enthusiasm.

Besides, a year-long celebration of the weekly’s 50th year of publication also kicked off at the Commonwealth Parliamentarian Association room of the House of Commons of the United Kingdom, says a press release.

Top newsmakers from politics and business to media and community were present at the event hosted by Labour’s Shadow Minister for Women and Equalities Dawn Butler MP.

Founded in London in 1969, it is the oldest running Bengali newspaper in the United Kingdom.