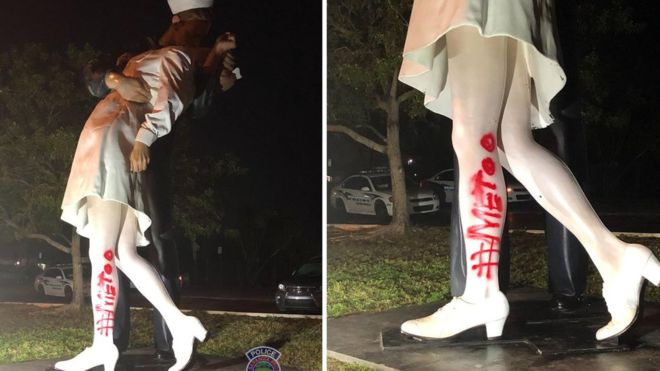 The day after the death of the US sailor famously photographed kissing a stranger at the end of World War Two, a statue depicting the moment has been vandalised with graffiti reading "#MeToo".

Red spray paint was used to vandalise the "Unconditional Surrender" statue in Sarasota, Florida, on Monday, according to local police.

For many the image of George Mendonsa kissing Greta Zimmer Friedman represents the joy felt across the US on the day Japan surrendered, ending World War Two.

However, in more recent years some have suggested the photo depicts an act of sexual assault, given the fact Mr Mendonsa did not have Ms Friedman's consent to kiss her.

The MeToo movement has shone a light on historic claims of sexual assault, and opened up a debate about consent and assault.

In a 2005 interview for the Veteran's History Project, Greta Zimmer Friedman said it wasn't her choice to be kissed and that Mr Mendonsa "grabbed" her.

However, she made it clear the kiss was a "jubilant act" and "it was just an event of 'thank god the war is over."

After Zimmer's death in 2016, her son told the New York Times his mother did not view the kiss negatively.

Sarasota Police Department shared the images of the defaced statue on social media, leading many to express their annoyance at the graffiti and the insinuation that the kiss was sexual assault.

Another commented: "Sexual assault is terrible but this was certainly not that situation. I can assure you this poor man who just died this week was not thinking of sexually assaulting a woman when he found out World War Two was over!"

Others suggested that the vandalism was disrespectful, given Mendonsa's recent death.

"[It is] sad this happened, especially since this guy just died the other day at 95 years old."

However, others suggested the graffiti was justified.

One Facebook user urged the city to "take the statue down".

"It may be called 'Unconditional Surrender,' but the circumstance was 'Involuntary Surrender.' She didn't know that guy, he just grabbed her and kissed her," the commenter continued.

"I'm not saying this woman feels like a victim, but technically it was an unwanted, unsolicited sexual act. Plain and simple," another person wrote.

"The MeToo movement is also meant to educate and understand that women cannot continue to be seen as sex objects that men can just take when they want!"

The City of Sarasota confirmed the graffiti was removed on Tuesday morning.