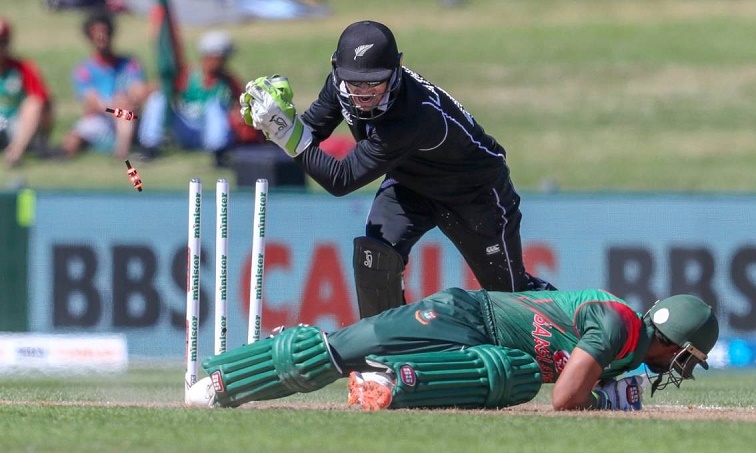 With a hard-fought 62 off 90 deliveries, Mohammad Mithun guided Bangladesh to 232/10 in 48.5 overs on Wednesday at Napier in the first ODI of the three-match series against New Zealand.

The Tigers lost four wickets before posting 50 runs on the board. Despite this poor start to the innings, Bangladesh posted 232 with the help of Mithun’s 62 and his two partnerships of 37 and 84 with Mehidy Hasan Miraz and Mohammad Saifuddin respectively in the seventh and eighth wicket partnership.

Tamim Iqbal was the first man to get dismissed. He failed to clear delivery of Bould with some outswing. The southpaw managed an edge and caught behind by Tom Latham. Followed by Tamim’s dismissal, Liton Das fell for one in eight balls. He was bowled by Matt Henry.

Boult took his second wicket when Mushfiqur Rahim went to cut him away. But the movement of the delivery bound Mushfiqur in an inside edge which has rattled his stumps. The right-hander fell for five. Right after Mushfiqur’s dismissal, Soumya Sarkar fell for 30 while returning a catch to bowler Henry. Soumy was doing well but failed to continue his golden start of hitting 30 off 22 deliveries.

In the fifth wicket stand, Mahmudullah Riyad and Mithun added 29 runs. Mahmudulla was near to stalled down in the wicket. But he fell while facing a 150kph delivery from Ferguson. He went to cut the ball but mistimed. Ross Taylor took a brilliant catch in the second attempt.

However, like Mahmudullah (13), Sabbir Rahman (13) and Mehidy Hasan (26) failed to exploit a good start. But Mohammad Saiffuddin did well with his 41 off 58.

Mithun and Saifuddin added 84 runs in the eighth wicket stand which was a record in the partnership. While making 84, they have surpassed unbeaten 70 of Mohammad Rafique and Khaled Mashud which was made back in 2003.

The 84-runs stand between Mithun and Saifuddin helped the Tigers pass 200-runs mark.