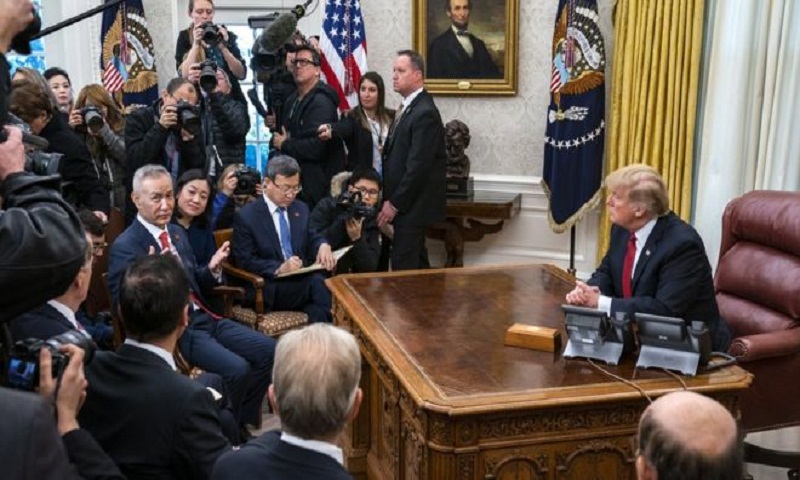 China's trade delegation says it made "important progress" in the latest round of talks with the US, China's state media reports.

At the end of a two-day meeting in Washington, China pledged to purchase an additional five million tonnes of US soy beans.

US President Donald Trump touted the promise as evidence that the two sides were making progress.

"Before we make a deal, it's a fantastic sign of faith," he said.

The Chinese delegation said in a statement that the two sides had had "candid, specific and fruitful" discussions, the Xinhua news agency reported.

At a press conference with Vice Premier Liu He on Thursday, Mr Trump said he hoped to meet Chinese President Xi Jinping to hash out a final agreement by the 1 March deadline.

He also said he planned to send US officials to China for another round of talks.

"We have made tremendous progress," he said.

"That doesn't mean you're going to have a deal but there's a tremendous relationship and a warm feeling."

In December, the US and China agreed to 90 days of negotiations, in an effort to defuse their escalating trade war, which had led to new tariffs on billions of dollars worth of goods.

Shortly after, China - by far the world's biggest importer of soybeans - bought 1.13 million tonnes of the crop from the US.

The White House said on Thursday the country had agreed to purchase an additional 5 million tonnes - a promise Mr Trump described as "tremendous".

China imported more than 30 million tonnes of soybeans in 2017 - a figure that dropped sharply last year amid the trade war.

However, the US has also pressed for change on issues such as the theft of trade secrets and rules that limit the operations of foreign companies.

Officials said those issues were discussed, but did not provide details.

US Trade Representative Robert Lighthizer said he was focused on securing a enforceable deal. He warned that many issues remained unresolved.

"We've made progress," he said. "At this point, it's impossible for me to predict success but we are in a place that, if things work, it could happen."